Brookhaven High School senior Flynn Phillips has been tapped for some eye-opening experiences through her involvement with forensics.

Her busy summer began with a trip to Kansas to compete in this year’s National Speech and Debate Tournament in Overland Park. The first and second place winners from the state competitions qualified, and as the top winner in Mississippi in the original oratory category, Phillips was able to make the trip in June.

Original oratory is a 10-minute event in which the competitor writes and memorizes a persuasive speech. Phillips’s “Good Talkin'” argued in favor of accents and dialogues. 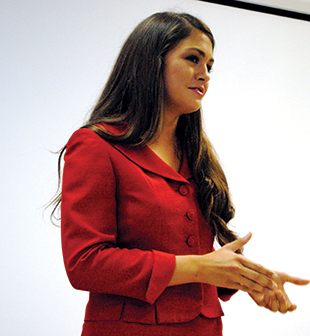 DAILY LEADER / JULIA V. PENDLEY / Flynn Phillips performs “Good Talkin'” in front of the Brookhaven School District Board of Trustees before attending the National Speech and Debate Tournament in Kansas.

“We should treasure our accents because they go back to our culture,” she said.

Phillips also discussed the stereotyping that happens when people have heavy dialects.

She competed against 500 people and made it into the top 60.

Later that summer, she returned to a three-week forensics camp at George Mason University, where she had originally written “Good Talkin'” the previous year. While there, she auditioned to join GMU’s forensics team. She was later offered a spot on the team after graduation. Phillips said she has not made any decisions but is thankful for the opportunity.

“It’s exciting to start the year off with that,” she said. “College forensics is really big now, and it’s really growing.”

Phillips said she first got involved in forensics because of her older sister, Maggie Cupit.

“I didn’t really think it was for me,” she said, “but it’s given me an idea of what I want to do after school.”

Aside from her educational opportunities, Phillips has also enjoyed getting to meet people all across the country through forensics events.

“The talent you see is unreal,” she said.

Phillips is the daughter of Paul and Ellie Phillips.

Several area people have been served with indictments on drug charges over the past several days. The Lawrence County Sheriff’s... read more