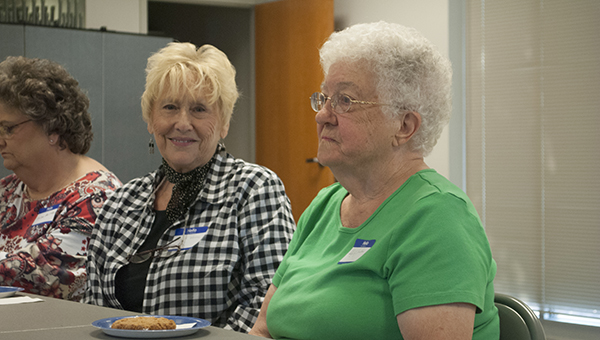 Death is always a traumatic experience for those left behind. For those who have been widowed, it can be particularly difficult to pick up the pieces. Not only are you left to mourn for the lost loved one, but you are forced to learn to take care of things by yourself.

“It changes the way you eat, shop, do business,” Becky Vaughn-Furlow, the facilitator of a Widow Support Group, said during their first meeting at the Jimmy Furlow Senior Center.

She said every couple divides up household chores and duties, and when one spouse dies, the one left behind has to pick that up.

The group has been meeting for over a year, but they recently changed to the Senior Center to accommodate continued growth. Many of the members felt others would feel more comfortable joining if it was at a neutral location, and the first meeting proved that theory right as many new faces joined the circle.

For the first meeting each woman present told her story. Some lost their husbands after many years together. Others lost them suddenly. Some cried. Some turned to humor. But together the group listened and gave advice when necessary. But the simplest thing that helped was hearing other women having the same thoughts, having the same struggles and realizing that they were normal.

Some talked about how it was more difficult as they aged.

“It’s harder for me now than in the very beginning,” Rosie Forrest said.

Montell Smith said as she can feel her own body grow weaker she misses her late husband more.

Others voiced concerns about practical matters. Josie Summers said the group should compile a list of reliable workers, such as plumbers, handymen and electricians. She said a lot of people don’t want to worry with a half-a-day job, so it would be good to know who to call on.

LaVerne Jackson said the longevity of the sorrow gets to be too much sometimes.

“You have so many wonderful friends you can talk to,” she said. “Pretty soon you worry that you’ve worn their ears out.”

When Hines’s husband died, Jackson brought her food and talk to her, but as usual she stopped not long after. When Jackson’s own husband died, she ended up calling Hines to apologize.

“I just completely forgot you were totally alone,” Jackson said.

But mostly they just reminisced. They enjoyed the opportunity to talk about their husbands without feeling guilty.

Helen Griffen said she took care of her husband while he was bedridden. He suffered from Alzheimer’s, and he began to always want her near. Since his death, she has gone back to work, but she still gets lonely at certain times.

Lisa Britt lost her husband suddenly while he was at work driving a truck. She talked about how difficult it was to go through her son’s wedding without his father there.

“She was very blessed,” Marjorie Barlow Smith chimed in. “Her husband worshipped the ground she walked on.”

Smith’s husband died from kidney cancer. They had been married for 54 years when he died, and they had three beautiful boys.

“I’ve been very, very lucky,” she said. “But it’s still not like having Charles.”

Jackson started dating her husband at 15. They got married two years later and were together until she was 72. They grew up together.

For about a year, Jackson and her husband helped take care of her mother, and one day Jackson couldn’t get her mother out of the car. Jackson’s husband just picked her up and carried her in. Two months later, he died of back cancer.

“I still cannot understand how he did that,” she said.

Millie Owens discussed how her husband taught her to live and love. Most importantly, he taught her how to die.

Her husband died in February from liver cancer after battling the disease for 18 months. In the end, she made the decision to move him out of the ICU into the Passage Room. Many people were able to come and visit and say their goodbyes. When he died, she knew he was in Heaven.

“I saw that look on his face,” she said. “I saw the peace. I was able to go through the next few days with joy. His presence was with me.”

Montell Smith’s experience was the opposite. She said her husband came in on a Saturday night from working.

The next morning he had a heart attack and was taken to the hospital, and within 48 hours he died.

“I think he died with his boots on because that’s how he wanted to go,” she said.

In the weeks leading up to Susan Nettles’s husband’s death, she knew what was coming.

“You could see this look on his face,” she said.

She kept pressing him to go to the doctor, and he refused for a couple days. When they finally got him to the hospital, he couldn’t even make it out of the car. The doctors put him on a respirator, and he lived for another three weeks. Nettles soon had to make the decision to take him off the machine, but she knew he wouldn’t want to live like that.

“I feel like he died when they put him on [the respirator],” she said.

Elizabeth Wesse was married to her husband for 34 years. Their lives were entwined from work to home.  Not only did they live together, but they worked together, too. She was a receptionist, and he was a naturopath doctor.

Wesse met her husband as part of a plan she had hatched with her pastor. At the time, she had three children from her first marriage, but she decided she wanted another husband. She told her pastor, “I’ve got a list.” She wanted him to be tall, have dark hair and be Christian. Her pastor quickly said “Well, God doesn’t work that way.”

A couple days later, her pastor called her back and suggested she start coming to church 20 or 25 minutes early and become the official greeter, and God was going to bring her husband through those doors.

“And that’s what happened,” she said with a laugh. “If you know anything about him, he’s German, short and has blonde hair.”
But even after he died, he is still taking care of her.

“When I get low on my finances, someone comes along that says Dr. Wesse was such a great man,” she said.

It’s those moments that carry her along.

But for many women, the group became a source of comfort and relief. It was a time to share similar emotions, and to know that they weren’t alone.

Nettles shared a sentiment that many women present agreed with.

“This grief stuff is a rollercoaster ride,” Jan Melancon said.

But she’s thankful to be able to navigate it in Brookhaven.

“There is a warmth in this community,” she said.

“The Lord gave the word; great was the company of those that published it,” Psalms 68:11. “If my people, which... read more