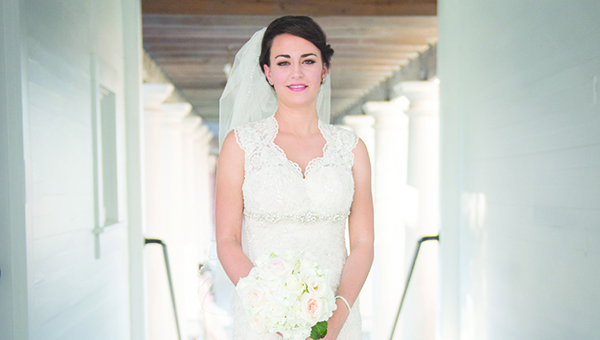 The groom is the son of Wendell and Becky Crooks of Pineville, Louisiana. He is the grandson of Marie Mertens, the late Gerald Cresong and Edward and Dorothy Crooks.

Given in marriage by her parents and escorted by her father, the bride’s matron of honor was her cousin, Denise Purdy, and her bridesmaids were Christy Murphy, sister of the groom, Ashley Bain, Meagan Hayes, Jamie Azios and Alicia Moody Guidry. Flower girl was niece of the groom, Lillian Bain.

The groom’s best man was his brother, Zachary Crooks, and his groomsmen were brother of the bride, Lee Covington, his brother-in-law, Andrew Bain, his uncle, Erik Lee, Alain Bonvecchio and Kaleb Langlanais. Ring bearer was his nephew, Oliver Bain.

Ceremony music was provided by James and Kristyn Opdenhoff which served as a beautiful backdrop for the lovely outdoor ceremony.

A reception immediately followed the ceremony indoors at the same venue. Guests enjoyed dancing to D.J. Tony Groove, and food and drinks provided by Spirits Catering.

Following a honeymoon trip to Jamaica, the couple will make their home in Lafayette.

Monet Glover of Horn Lake and Varris Kees of Brookhaven were united in marriage on Sunday, Nov. 7, 2015, at... read more