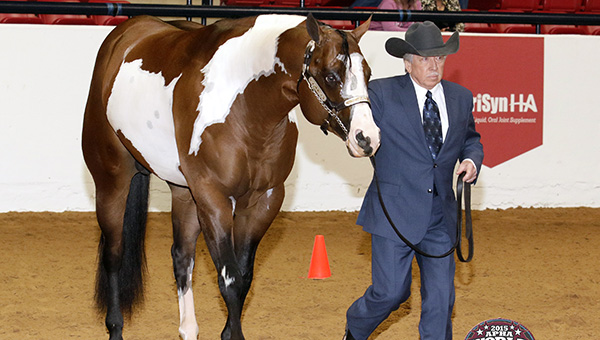 “Unanimously winning under all five judges is pretty difficult to do,” Leggett said.

“Halter classes are an exhibition of confirmation and quality of the breed,” Leggett said. “They are an indication of what the breed should be.”

The show held recently in Fort Worth, Texas, is one of the American Paint Horse Association’s premier events.

“The horses at the APHA World Championship are as good as it get,” Leggett said. “They are the best in the world.”

Nearly 1,050 horses descended upon Will Rogers Memorial Center, a 6 percent increase in horse attendance from 2014.

Class entries were up for the third consecutive year, with this year’s show boasting a 13 percent increase in entries from 2014. Owners and exhibitors representing 42 U.S. states and five countries participated in the event.

“People come from all over the world to show their world class horses,” Leggett said.

Championship honors were up for grabs in 282 classes, including 185 world champion events, and APHA paid out nearly $600,000 in cash and prizes. Quality was deep, and a total of 316 different horses and 285 individual exhibitors brought home champion or reserve titles at this year’s show.

“It takes the whole package to win, “ Leggett said.

The success Transcendence achieved would not have been reached without the help of Hugh Leggett III, Rosemary Leggett, Harold Montgomery, Caroll Montgomery, Tim Finkenbinder, Kelley Stone and his many supporters, Leggett said.

“Transcendence will show in the amateur and open classes at the 2016 APHA World Championship Show,” Leggett said. “He will also be entering the breeding barn this year.”

Leggett said he is excited to see what the stallion will achieve in the future.