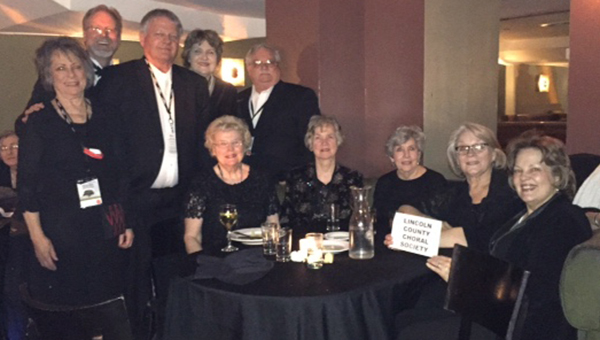 The Lincoln County Choral Society and the Mississippi School of the Arts choir traveled to New York to perform at Carnegie Hall this week.

Rice said the groups helped make up the 207-member choir that participated in a five-day residency at Carnegie Hall. Other members of the combined choir were from all over the United States, he said.

Rice said the LC Choral Society and the MSA choir were invited to perform by a former colleague of his, Dr. Jamie Meaters, Associate Artistic Director of Distinguished Concerts International New York. Before becoming the associate artistic director, Meaters served as the director of music at Mississippi College, Rice said.

“Dr. Jamie Meaters conducted the chorus at Carnegie Hall, but I prepared my choir,” Rice said.

The combined Carnegie Hall choir performed “Requiem for the Living,” a piece by Dan Forrest. Forrest is an up-and-coming composer in his 30s, Rice said.

“The premier of ‘Requiem for the Living’ was done at Carnegie Hall two years ago, and my choir was involved in that as well,” Rice said. “Since then it’s been performed all over the world. It’s really caught on. It’s unique and gorgeous.”

“We had rehearsal for three days leading up to the performance and then dress rehearsal the day of,” Rice said.

Rice said performing at Carnegie Hall benefits the members of the LC Choral Society and the MSA choir by giving them experience working with a professional symphony orchestra.

“You get to see what it is like, and also what’s involved in putting together a work that large with other groups,” Rice said.

Rice said being in Carnegie Hall was awe-inspiring.

“I mean, it’s sort of America’s concert hall,” Rice said. “When you walk out and look into the audience and the lights in Carnegie Hall turn down, it’s just beautiful. Then you sing and hear all that wonderful sound coming back at you, and it’s very exciting.”