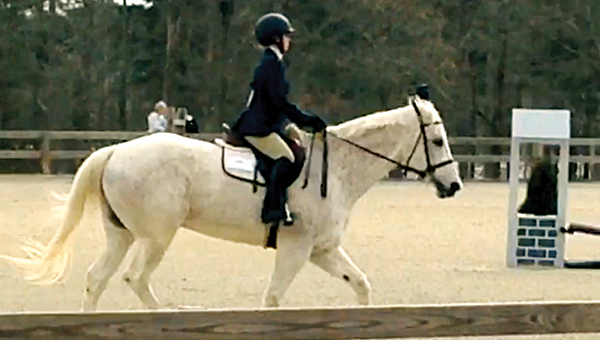 A Brookhaven teen recently qualified for the Region Nine Equestrian hunt seat finals as a first-year member of the Jackson Prep Equestrian Team.

Miriam Berry, 16, along with the rest of the team, competes in the Interscholastic Equestrian Association, which provides an affordable way for students to experience showing without the expense of ownership.

According to the IEA, students ride horses that are furnished by the host barn and chosen by random draw. The use of personal tack is not allowed and limited schooling is permitted. This equalizes competition variables and tests the horsemanship of the contestants. 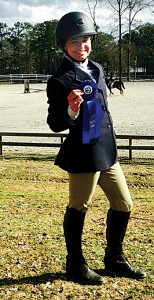 “In IEA, you don’t get to choose your horse,” Berry said. “You ride a completely different horse that you’ve never met. You don’t know anything about it. Before you get on, you get the option of a crop or spur. Right when you get on, you go straight into the ring. You don’t get time to be, ‘Alright, does this horse pull too much, like what do you have to do?’ Once you’re in that ring, you have to figure it out.”

Berry said that it has been a great experience getting to work with Powers and ride at Providence Hill. The staff and friends have been valuable in helping Berry grow as a rider and prepare for each show, she said.

Berry has competed in three IEA shows and two Mississippi Hunter Jumper Association shows since the beginning of the show season in September.

The last show Berry competed in allowed her to earn enough points to qualify for the IEA region nine finals in Conyers, Georgia, which will be held at the Georgia International Horse Park on Feb. 21, Shufelt said.

According to the IEA, points are tracked for individual rider accomplishments and for overall team accomplishments. Individuals and teams earn points to qualify for regional, zone and national finals.

“The show where I qualified was called Falcon Hill Stables, but it was hosted by Magic City,” Berry said. “My division had maybe 30 or 40 girls. It made me really nervous because it was like an extra show, but Coach Powers just kept us on track, kept motivating us, keeping us all calm. It was very exciting. It was just an amazing place.”

Berry said she was influenced by her parents to begin barrel racing and trail riding at 4-years-old, but Shufelt was helpful in getting her to compete in English events on the Jackson Prep team.

“He told me that I would be great at it,” Berry said. “He told me all about it. He was like, ‘You can do this. I believe in you,’ and that’s where it started for the English riding.”

Berry is a sophomore at Brookhaven High School.