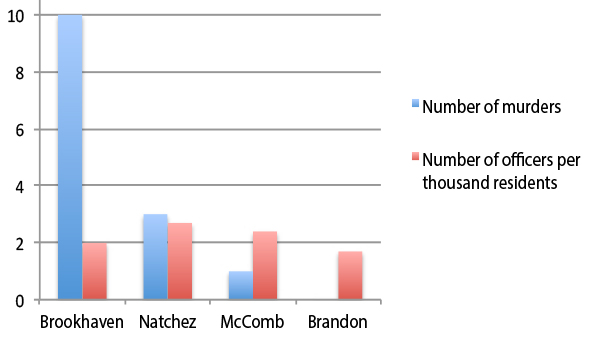 Would a larger police force curb some of the violence that plagued Brookhaven in 2015?

Police Chief Bobby Bell thinks so. And former chief Pap Henderson agrees. Henderson said that having more police officers on the streets would help with the crime and murder rates in Brookhaven.

“I certainly think so,” Henderson said. “There is no doubt about that. It would definitely help the department to cover more areas.”

Statistics, however, suggest that there are factors other than the size of the police force that impact murder rates.

Brookhaven’s murder rate for 2015 was the highest of those cities. In 2015, 10 homicides occurred in Brookhaven, with a population of approximately 12,470.

Natchez has a population of approximately 15,269 and reported three murders in 2015.

Brandon, a larger city with a population of approximately 23,156, reported no murders for 2015.

Bell has requested pay raises for his officers in an effort to reduce turnover and increase the size of the force.

McComb has the capacity to employ 35 officers but currently only has 31 officers, Sullivan said.

Some have disagreed with the suggestion that an increase in the murder rate correlates with the number of officers on the force.

“I worked for the police station,” Alderman Randy Belcher said. “I’ve got 15 years in law enforcement. I don’t think the crime rate has nothing to do with the officers we have or the lower pay. They’re a little short, but not enough for how the crime rate is up here.”