The Lincoln-Lawrence-Franklin County Library hopes to honor those who served in the Civil War by purchasing the model of Dr. Kim Sessums’ African-American monument.

Sessums’ original monument is located in the Vicksburg National Military Park and stands approximately 16-feet tall, with the pedestal. Sessums was selected from six artists to complete the project in 2003. 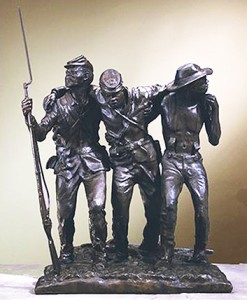 The model that will be placed in the main wing of the library stands approximately two to three feet tall and is made of solid bronze, library director Henry Ledet said.

“It will be a major feature in our building,” Ledet said. “We are finishing up our remodel. We kind of feel like this would be the icing on the cake, if we could add this sculpture to it.”

The statue depicts three men, two of them helping one as they march. Two men are dressed as Union soldiers and third wears a hat, no shirt and suspenders holding up his pants.

“We’re working on raising the funds for it right now,” Ledet said. “We’re hoping to raise the funds and get a grant from the art commission. The piece is an incredible $17,500. The grant that we are applying for is $5,000 and the trustees have already raised over $6,000 so we are a long way along toward it.”

The library will find out if they received the grant in June and the goal is to purchase the piece by the fall, Ledet said.

Ledet said Sessums is helping with the library renovations and mentioned the piece was available. The library trustees decided they would raise the money to purchase it, seeing the need for art diversity within the library, he said.

“I think it crosses so many boundaries,” Ledet said. That it’s the perfect piece for us. Kim is a really, really talented artist and he lives here in Brookhaven, less than a mile from the library. It would really be sad for us not to take advantage of having a talent of that grade here in our community. The piece that they’ve chosen in particular is meaningful because a large part of our community is African-American.”