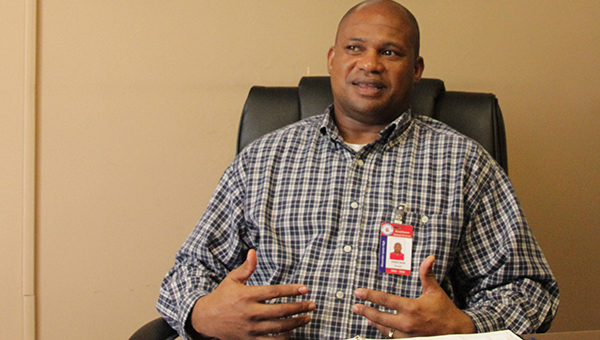 Patrick Hardy believes a person should not let circumstances dictate the outcome of their life. He embodies that saying in his own life, overcoming significant odds to achieve what he has today.

A native of Brookhaven, Hardy grew up in a single-parent home with a mother that was addicted to drugs.

“Growing up here, my mom got strung out on drugs,” Hardy said. “I’m a young man who — I don’t know who my father is. I had to come through a lot of obstacles to get to where I am. It’s all by the grace of God that I made it, and I just feel like I need to share that with someone.”

Hardy attended the University of Mississippi and graduated with a degree in criminal justice with the intent of never returning to Brookhaven. But God had a different plan.

“When I first got to Ole Miss, I wanted to be in the medical field, but I found out that it was very difficult trying to study,” Hardy said. “And I was on a track scholarship. I went through the catalog and chose to get into criminal justice. I wanted to become a U.S. marshal, deputy U.S. marshal. Once I graduated, U.S. Marshals had a freeze on so I said, ‘I’ll come back home and work for a little while and try it again,’ so I came home, and I’ve been here ever since.”

When Hardy returned home, he worked as a Brookhaven police officer and the resource officer at Fannie Mullins School, which houses the alternative program.

Hardy said Rod Henderson, who currently is the deputy superintendent at BSD, approached him about teaching and coaching.

“My shift supervisor was Bobby Bell, who is the chief of police now,” Hardy said. “He told me that it was something I needed to do, so I went back to school and got my certification and started teaching and coaching.”

Hardy earned his teacher’s certification at Jackson State University and gradually moved from teacher and coach to lead teacher, then to assistant principal and now to principal.

“In 2004, the Lord called me to preach his word, and I’ve been preaching ever since under my pastor at St. James,” Hardy said. “I believe God called me to lead a group of his people. This year, I was elected to be the pastor of St. Paul M.B. Church, where I’ve been the pastor since the first Sunday of February.”

Hardy said having three full-time roles within the community is not an easy task, but it is what he was called to do.

“God keeps me sustainable,” Hardy said. “He’s allowed me to be able to have a good sense of order.”

“I go to the sheriff’s department at 6 o’clock at night, and I get off at 6 o’clock in the morning,” Hardy said. “It’s not every night. I work two nights, and then I’m pretty much off two nights. I’m usually here (at AJH) by 6:45. I go straight home, take a shower, pray with my family, and I’m out the door to come here to be here before my students and my teachers get here. It’s just what I believe to do. When I’m off from the sheriff’s department or in my spare time, I try to make sure that I spend time with my family. In between all of that, at 4 o’clock in the morning, I’m studying the word of God. God, he’s balanced it out for me. He’s shown me how to do it.”

Hardy said his wife and five children are extremely understanding of his work schedule but try to schedule as much family time as possible.

“My wife allows me to get into bed to sleep,” Hardy said. “My kids, they don’t bother me. They understand Daddy just got off work, and he went to work, so he’s tired. Now tomorrow is all family day. We’re going to spend time together.”

Hardy said the driving factor behind his service is to share his story and teach that a person’s circumstances do not have to dictate their outcome.

“I’ve always had a heart for young men growing up in Brookhaven, and how I grew up, it has affected me a lot to always want to share, that no matter what your situation, you direct your outcome,” Hardy said. “We all deal with difficult circumstances, but they don’t have to dictate how we come out of it. And I just feel like sharing that.”

Hardy believes that each person who guided and pushed him to do better were strategically placed in his life by God.

“When I think about where I am today and I think about all the people God has placed in my path that I may get here, it amazes me,” Hardy said. “It wasn’t anything that I was special about. I believe God places people in your path that help you along the way and from early on — I was in the seventh grade in Brookhaven when I found out my mom was strung out on drugs. She sold everything in our house. From that point on, it’s been somebody in my path to push me. These people had no reason to talk to me or anything, but God touched their hearts to love me in spite of it all.

“I lot of people say, ‘Well your story seems so sad,’ but it’s a happy ending now because my mom today, she doesn’t do drugs. We go eat dinner with my mom every Sunday after church. That time period through the seventh grade all the way through my college years, I didn’t have anybody. Today we’re a big happy family. I just think all of that, God laid out so I can give my testimony that if we just trust in him and believe him, he’ll change everything for us. That’s what I live by.”