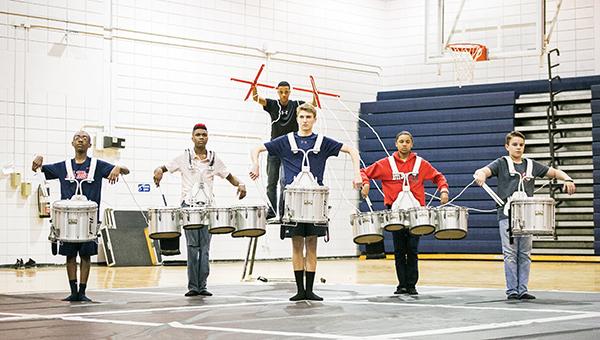 Both groups will perform their shows to the public Thursday at 7 p.m. in the BHS gym. The show is free admission.

The two groups will compete separately at the Thibodaux Civic Center in Louisiana.

“We had a long talk at the beginning of the season and I said, ‘You are young adults and you have done this without me, but now your head director is gone and it’s up to me, so you’ve got to trust me,’” Smith said. “And at first they didn’t, but then we started winning.”

Each student in the percussion group has talent that should be showcased, Smith said. All of the students play more than one instrument so they can compete in the fall and spring, he said.

“There are about five different sizes of bass drums played separately but as a group,” Smith said. “The group is made up of an array of different instruments besides the drums.”

Smith said the percussion and color guard affords each student the opportunity to begin thinking about life’s critical questions, all while having fun.

“It gives them an opportunity to answer questions that they have,” Smith said. “Can I be a part of a group? Can I contribute to something and be productive and successful at it? They enjoy music; otherwise they wouldn’t be doing it. They wouldn’t give up their time, their Saturdays, late nights — like we had last night. It gives them a sense of fulfillment to know that they are good at something and this is something that nobody can take away from them. Right now, with the level of enjoyment that they’ve got, they’re reaping the benefits. They’ve come together as a team, they’ve worked together as a team and the results at their competitions show it.”

“I have the best group — playing wise, conduct and attitude wise — that I have ever had in my life,” Smith said. “I enjoy being with them.”

Xtreme MsBehaven Visual Ensemble consists of 20 students directed by Beck and Stephanie Verucchi. The group will perform to a combination of songs, including Megan Trainor’s, “Dear Future Husband” and Kimbra’s “Settle Down,” Beck said.

The color guard has been practicing since November, and although the members struggled with the concept at first, they have improved at every competition, Beck said. 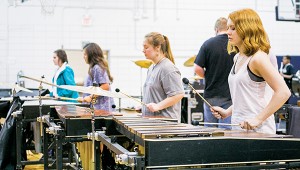 “It has blossomed since last year because they have worked so hard,” Beck said. “They actually love it because they know what it is and they’ve gone to all these competitions and they’ve seen all these other schools do it. They’ve basically evolved themselves from watching other groups do all these routines.”

Beck said he loves to work with the group to see how each student develops and collaborates together.