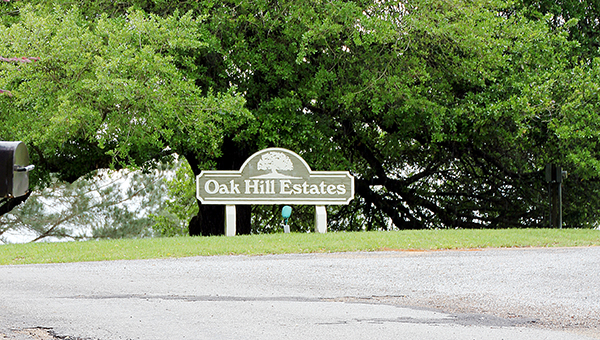 Photo by Alex Jacks / Oak HIll Estates is just one neighborhood from the 2007 annexation slated for sewage and water work this year.

The city of Brookhaven continues to make progress on water and sewer lines in some areas that were annexed years ago, but officials are facing some unforeseen problems in other areas, namely Oak Hill Estates.

In 2005, the Brookhaven Board of Alderman began the process of annexing parts of Lincoln County. Former Mayor Bob Massengill said when the annexation was completed in 2007, it was necessary to keep the city fiscally viable. At the time, it had been decades since the last annexation and the population of Brookhaven was under 10,000. The annexation increased the population by about 3,000 people, which is more appealing to new industry and business as well as allowing room for further expansion, officials said at the time.

It also increased tax dollars for the city.

The annexation came with the promise of expanding city services including fire protection, police services, parks, road maintenance, solid waste and water and sewer to annexed areas. With the hiring of more police officers and firemen, officials were able to cover the safety in new areas, but water and sewer services haven’t expanded at the same speed.

“There is a misconception about that,” said Ward 6 Alderman David Phillips. “People think that if they pay their taxes they should get water and sewer also. It’s a fee-based system. By law it has to be completely self-sustaining, so if you are not receiving water and sewer from the city then you are not paying for it.”

Over the past eight years, the task of providing water and sewer services has been passed down from previous mayors and aldermen and now rests on the shoulders of Mayor Joe Cox and Aldermen Randy Belcher, Terry Bates, Mary Wilson, Karen Sullivan, Shirley Estes, Fletcher Grice and David Phillips.

“We just felt like the city was not in the position to indebt the taxpayers to do the work at that time and to cause any more hardship,” Phillips said, referring to the economic crisis of 2007 and 2008. “It’s time that we have to reach out and provide the services that were guaranteed to these areas. There has never been a cheaper time to fund anything in my lifetime.”

At a 2014 Board of Aldermen meeting, WGK engineering presented a project status report that said the Annexation Improvements Project will extend water and sewer services to several areas throughout the city with an authorized maximum loan amount of $8 million. The facilities plans had been submitted to the Mississippi Department of Environmental Equality and Health Department. At that point, the environment review was underway, topographic surveying for design was underway and was 85 percent complete and the preliminary design had begun for Weed Lane, Deer Run, Moreton Estates and Oak Hill.

Phillips said they chose to focus on areas that were supposed to be the “easiest” to quickly provide services to, with the amount of money they had at that time. The 2014 report continued on to say that WGK experts were to identify any easement needed by the end of January 2015 and provide those to the city attorney to begin acquisition. Construction was expected to begin around October 2015.

McKenzie said construction has now begun and is moving forward.

The board announced the purchase of Brignall sewage system in March from the Lincoln Rural Water System for $37, 374.80. The Brignall water system was purchased by the city in September.

One of the biggest problems since the annexation revolves around the Oak Hill Estates subdivision.

According to several emails between Cox and Oak Hill Estates Homeowners Association President Kevin W. Laird, the two parties are trying to work out the legal issues that have arisen regarding the land and roads the subdivision sits on.

In an email to Cox, Sullivan and Estes on Feb. 22, Laird said, “The homeowners in Oak Hill Estates are now concerned as to what city services we will be excluded from as tax paying citizens since you three, as elected city leaders and our representatives, have made it clear that the city is under no obligation to do anything in our subdivision. These include current maintenance of street lights (three of which are out), the patching of numerous potholes that are present at this time, rubbish pickup on Fridays, recycle/garbage collection on Mondays and Thursdays, and police/fire protection. If our safety, convenience and comfort and well-being as tax paying citizens is compromised because of your unwillingness to work with us and for us, we need to know about it.”

“Please note that as elected city leaders, we are very concerned with every aspect of our city. However, in our opinion, the city is not a party to the contractual obligations created by the covenants of Oak hill Estates, as recorded Sept. 25, 1995,” Cox said in his response to Laird on Feb. 24.

“The city of Brookhaven provides essential services such as, police and fire protection, garbage, vegetative debris and recycling pickup, and has since the annexation,” Cox said. “In the near future, city water will also be constructed in Oak Hill. The city has no plans or reason to exclude or limit any of these services to Oak Hill Estates.

“As you know, we have met with representatives of Oak Hill Estates,” Cox said. “Tomorrow, we are meeting with bond attorneys regarding the process for obtaining special assessments and calculations for each Oak Hill homeowner to have a quality road constructed. We know this information will be helpful when the Home Owners Association meets. It is our present position that the City does not own the roads within Oak Hill Estates. As always, as city officials, we are available to meet and sort through this and help provide options for the residents of Oak Hill Estates.