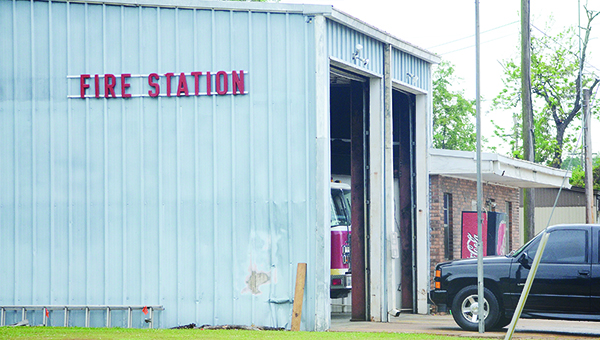 Photo by Luke Horton / Fire Chief Tony Weeks has approached the Brookhaven Board of Aldermen to address concerns about Fire Station 2. The facility, which was built in the ‘70s, faces obstacles due to age.

Fire Station 2 needs to be replaced, according to Brookhaven Fire Chief Tony Weeks, but until that can happen it needs repairs to extend its life.

The Brookhaven Board of Aldermen discussed the next steps in improving the station at a recent board meeting.

Weeks answered questions from the board about his report on the condition of Station 2.

The board determined that it would amend the fire department’s budget to compensate for the cost of the repairs once Weeks identified what needed to be fixed at Station 2.

At the last meeting, Weeks explained to the board that Station 2’s roof was leaking and every time it rained water was backing up into the building. Since then, the fire station cleaned the leaves and debris behind the building in an effort to keep rainwater from flooding it during a storm, Weeks said.

“I need to get somebody to reseal the roof, and we need some gutters,” Weeks said. “There are a few things that need to be done to it. It probably needs a paint job.”

Ward 4 Aldermen Shirley Estes said the maintenance problems at Station 2, located on Willard Street, have been occurring for more than three years.

“These are things that have been coming up and we know we’ve had problems,” Ward 5 Alderman Fletcher Grice said. “Some of the things have arisen over time.”

The long-range plan is to replace the facility, Weeks said. These repairs are a stop-gap measure to make the facility useful until a new one is built, he said.

Weeks said he foresees the new station being built on N. Second Street and Willard Street.

“The reason we looked at that location is — I was trying to look ahead, at the big picture,” Weeks said. “You have a station there, then you’ve got Station 3 and the central station and in the future if you go further south to say 84 and S. First — in that vicinity — you’d have a station in each quadrant in the city. Your radius would overlap a mile and a half from each station.”

Currently, there are few outside funding options to build a new station, meaning the city will have to come up with the money, Weeks said.

“When the mayor made a trip to Washington D.C. to talk to Thad Cochran’s people, they said there was no funding for brick and mortar projects. I checked on the assistance firefighter’s grant and the last time they did any funding for fire stations was back in 2009,” he said.

Weeks recommended to the board that a new station should be built larger than the current facility, which was constructed in the 1970s. The fire trucks are barely able to fit in the current truck bays, he said.