Brookhaven Academy teachers opened the world of science to their students by allowing them to participate in the Student Spaceflight Experiment Program over the last year.

BA junior Missy Clanton and her family traveled to the Cape Canaveral Air Force Station in Florida last week to watch the launch of the school’s experiment into space on the SpaceX CRS-8. 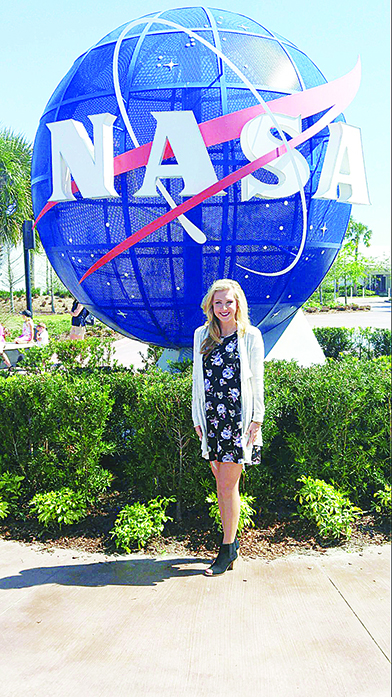 Missy Clanton traveled to Cape Canaveral last week to watch her experiment get launched into space on SpaceX CRS-8. She and a group of Brookhaven Academy students developed the experiment over the past year under the advisement of BA teachers Leslie Hood and Dianne Watson.

The experiment is titled “Yeast as a Model Organism to Study COX-2 Enzyme Production in Microgravity” and focuses on how the enzyme affects colorectal cancer. 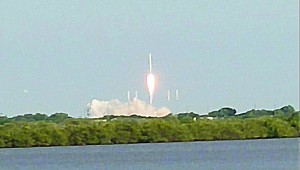 “Colorectal cancer (CRC) has affected many lives throughout the nation. Studies show that one in 20 people get CRC each year,” BA’s program summary stated.

“This cancer is caused by uncontrolled cell growth in the colon, rectum, or appendix. Colorectal cancer is the second leading cause of cancer-related deaths in the United States. Statistics show that over 90 percent of people who get colorectal cancer die.”

“Yeast is often used as a model organism in cancer research,” the proposal explained. “The yeast Saccharomyces cerevisiae is used in this study due to its production of the COX-2 enzyme and its suicidal response (apoptosis) to aspirin. Microarray analysis will be used to measure mRNA levels of several thousand genes in yeast, including those involved in the production of COX-2 and the initiation of programmed cell death. The specific aim of this investigation is to evaluate gene expression in S. cerevisiae by microarray analysis. Statistical analysis will determine possible variances in the Earth-based experiment compared to microgravity.”

Clanton explained how the participating students created the idea.

“At the beginning of the experiment we were researching cancer and how zero gravity would have affect on it,” Clanton said. “Some research shows how this enzyme could affect it. We can’t send human cells to space so we had to piece together what would work.”

On the day of the launch, Canton, her family and representatives from schools across the country were given the chance to learn more about the space center, while watching their experiments take flight.

“We were invited to come watch the launch because of our experiment,” Clanton said. “We got to watch it go up. Before the rocket launched, we got to take a tour of the center and see the grounds. It was really cool to see all the things they use to send the rocket into space.”

“When we get our results back we are going to take them to Donna Sullivan (mycology and virology researcher) at UMMC in Jackson,” Clanton said. “She’s going to help us to look at what we have and determine what it means.”

Clanton said traveling to Florida to see the space shuttle launch was an incredible experience, and she is excited to see the outcome.

“It was just a really good experience that not many kids my age get to do,” Clanton said. “It was a great opportunity to learn about science.”

Providing students with the tools and opportunity to participate in an experiment that could make a difference is life-changing, Hood said.

“This is our second time to be involved in SSEP,” Hood said. “After participating, the students better understand the research process. They understand the scientific process. Some of them even choose careers based off of this experience. It opens up their eyes to the world of science. It takes them out of a textbook into the real world.”

SSEP launched in June 2010 as a United States national Science, Technology, Engineering and Mathematics education initiative. The program typically gives more than 300 students across a given community the opportunity to design and propose real microgravity experiments to fly in low Earth orbit.

The SpaceX CRS-8 that carried the experiment to space made headlines when the rocket booster landed safely on an ocean platform after sending the payload into space.