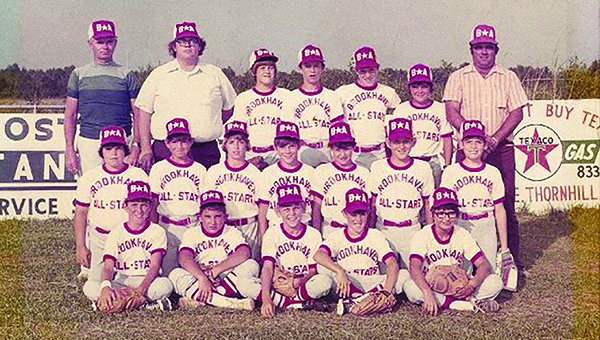 Keystone Park has been a constant in the lives of Lincoln County residents since the 1960s. The baseball fields provided a place for children to learn how to play ball, and for parents and grandparents to make memories.

With the opening of the new Lincoln Civic Center Baseball Complex, Keystone will eventually be cleared and the land marketed for development.

Lincoln County residents reminisced on their time at Keystone Park over the last 50 years.

Coach, father and ball player Todd Adcock said Keystone provided him a place to grow up and learn but also to teach his own children how to play the game.

Adcock said his best memory at Keystone was in 1973 on his birthday.

“On my 12th birthday, I got a brand new glove,” Adcock said. “I insisted on wearing it to my baseball game that day. A pop fly came straight toward me and, since the glove wasn’t broken in yet, I missed. My dad was the coach, and he started yelling at me because I missed.”

Although Adcock missed the ball that day, he said he was so proud of that glove and using it for the first time at Keystone Park made it that much better.

“You can talk to anybody 70 and under from Lincoln County, and they probably played out there,” Adcock said. “They probably watched their children and grandchildren play out there. It’s been a part of our community for a long time. It’s sad but exciting at the same time because now we have a new field. It served us, and it was time to get something new.”

Former coach and baseball player Bill Sones said it was not the quality of fields that mattered, but the experience that athletes had on the fields.

“It was just a neat place to organize and call our own,” Sones said. “It could have happened at a lot of different fields. It was the quality of the parents, coaching and how involved the community was that mattered. Playing baseball at Keystone fields was a community-wide event. I still remember a lot of people that I played baseball with when I was younger.”

Sones said meeting other families in the community that you would not meet otherwise made for good memories.

“I had a chance to hit home runs on that field,” Sones said. “Going to the city championship on that field even if I wasn’t playing was a great memory. Community baseball is such a great thing that pulls a lot of people in from all different backgrounds. That holds a lot of memories for people.”

University of Southern Mississippi baseball alumnus Colby Calcote said he got his start at Keystone.

“In my opinion, Keystone Park provided an avenue for kids to have a place to go to play ball and acquire a sense of worth,” Calcote said. “During my time, there was no travel ball, where you played all year around, so you looked forward to playing baseball that one time a year at Keystone Park.”

Calcote said the friends he made at Keystone became his friends for life, and now when they get together, they reminisce about the good times on those fields.

“Spending time with my dad, who is now deceased, and with my now adult friends provided me with many memories,” Calcote said.

Lincoln County Chancery Clerk Tillman Bishop said the county owns all of the property that Keystone Park sits on, and it has always been used as baseball fields.

“If someone had come in wanting to use the land from an economic development standpoint, we would have had to sell it, that is why the land was never marketed for that,” Bishop said.

The county’s hope is that the land can now be sold to a company that would like to join the industrial park and produce jobs in Lincoln County, Bishop said.

“At some point the property will be cleaned up and marketed that way,” Bishop said. “There has been some interest in it. It is our hope now, since we have what I think is the best baseball facility in the South, that we can market the property without having an effect on the sports of the county and the families of the county.”

The Brookhaven Animal Rescue League says a man entered its facility and beat a cat Friday afternoon. According to a... read more