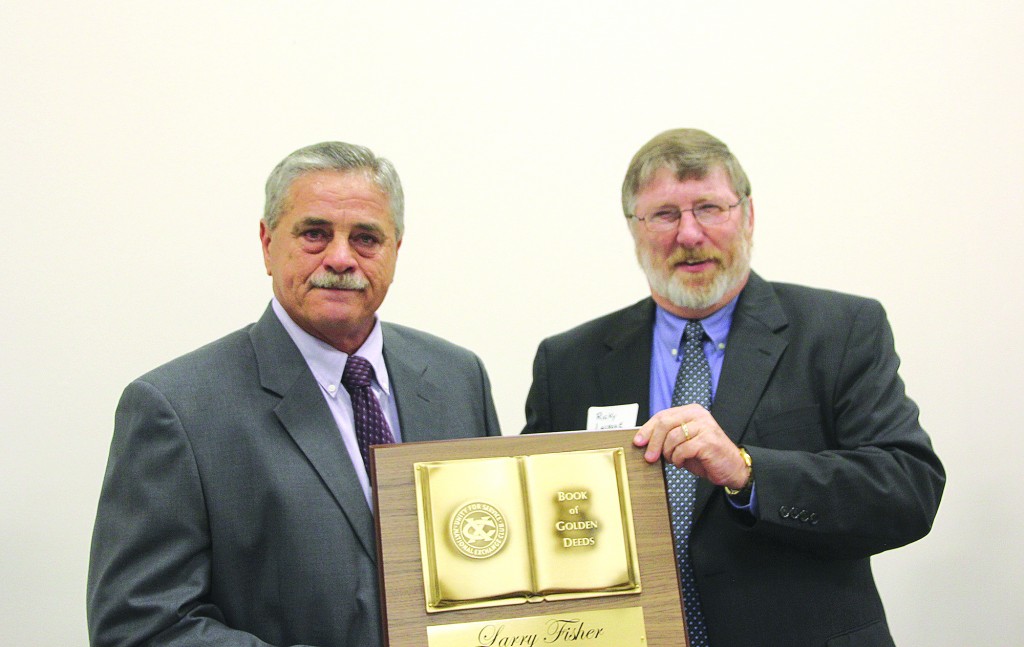 Photo by Alex Jacks/ Larry Fisher was honored with the Golden Deeds award by the Brookhaven Exchange Club Friday night.

Larry Fisher was honored with the Golden Deeds award by the Brookhaven Exchange Club Friday night at the club’s 69th annual banquet.

The banquet at the Copiah-Lincoln Community College’s Billy B. Thames Conference Center honored Exchange Club members with attendance and service awards, as well as one outstanding member with the John L. Leary award.

Master of Ceremonies Bill Hickman first explained the history and meaning of the Golden Deeds award.

“The first book of Golden Deeds was presented by the Exchange Club of Huntington, Indiana in 1919,” Hickman said. “The Brookhaven Exchange Club was chartered in 1947 and in 1953 they presented the first book of Golden Deeds to Mamie L. Martin. Since that time, the Brookhaven club has been privileged to honor 70 additional extraordinary people who have exemplified the spirit of giving without the expectation of something in return.”

Hickman explained why what a person does in their life to help others is important, and then ended his Golden Deeds speech with a poem titled “The Dash” by Linda Ellis.

“A friend of mine posted something on the Internet — it was an ad for a tombstone for sale,” Hickman said. “It had already been engraved with two dates — a beginning date and end date, born and died — but they left the name off. It was a really good buy for anybody born in 1948 and who died in 1999. You just had to fill in the blank. For some reason, the name was left off and all that was left was a dash, just a dash between the dates. Now surely that person’s name was important, but what that person did between those two dates is what will live forever in the lives of those who were touched or influenced by that person. From 1947 to 2016, the Brookhaven Exchange Club has been in existence. Those aren’t important dates; the dash in the middle that represents what this club has done for this community is what’s important.”

“It is my privilege tonight to introduce the Golden Deeds winner tonight,” Lagrone said. “To give you a little history on the Golden Deeds — we reach out to the community and advertise to get input from the community. This year’s winner was born on July 11, 1952, was the youngest of 10 children, grew up in Walnut Grove, Mississippi and graduated from Walnut Grove in 1970.”

“This individual and his spouse have four children and seven grandchildren,” Lagrone said. “This individual worked for the International Paper Company for 38 years. They moved to Brookhaven in 1989. Previous to that, they lived in Philadelphia, Mississippi, and Amite, Louisiana. Upon moving to Brookhaven, Mississippi, this individual became a member of First Baptist Church where he served as a Sunday school teacher, deacon, chairmen of the deacons, on the property committee and missions committee.”

“He has a servant’s heart,” Lagrone said. “He’s been led to build churches and rebuild churches. He’s been on mission trips to several different states including Minnesota, Tennessee, Illinois, Wyoming, Colorado, Iowa, Georgia, and various different countries including Honduras, Mexico and Ecuador. After Hurricane Katrina came through, this individual went on a mission trip to the Mississippi Gulf Coast to help rebuild homes. He went every weekend for almost a year and a half.”

Fisher accepted the award with an emotional speech.

“I tell you, I’m not much for words so I won’t be long,” Fisher said. “I can look around this room and I can find so many people more deserving than I am of this, so thank y’all. I don’t think I ever seen an award any nicer than this. Thank y’all and God bless.”

“The John L. Leary award started in 1953,” Brown said. “It has been given to 62 different members and tonight we will add another name to the list. This is a club member only award and is voted on by the members. This award is in recognition of the hard work a member puts in throughout the year and is an example of what an Exchange Club member is meant to be. This year’s member is someone you can county on to be there, no matter what’s going on, whether making it to Thursday night meetings, putting out flags, running the rides or working the equipment, he’s always there. His 100 percent attendance to the meetings is just an example of it. He’s been a member since February 2012, served on the board of directors for two terms, he’s loved by us all including my own kids, and I promise you when the Scrambler’s going around, he’s armed with his water gun.”

In addition to the awards, the Exchange Club recognized its new officers and board members and past Golden Deed recipients in attendance.

Lt. Michael Harvey with the Brookhaven Police Department has been working to keep the streets of his city safe for... read more