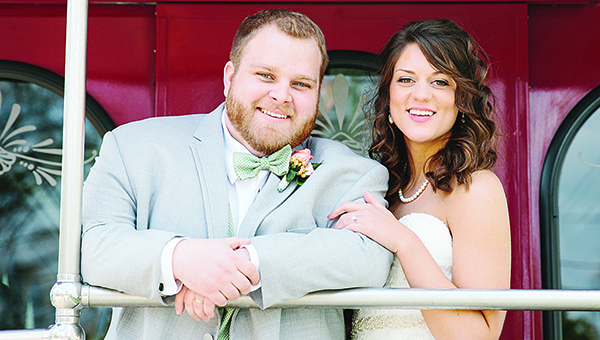 The bride, given in marriage by her parents, wore a strapless white gown covered in delicate white Chantilly lace, featuring a V-neckline and a chapel-length train. She carried a bouquet of peach roses, white roses and baby’s breathe.

The groom and groomsmen wore grey tuxedoes with meadow-green vests. The groom’s bowtie was meadow-green and dark green plaid, which matched the groomsmen’s neckties.

A reception was held at Café Luna in downtown Raleigh. Guests were shuttled to the venue via a vintage trolley. The café was decorated with an Italian theme and featured a patio area and photo booth. Bridesmaid bouquets decorated the tables.

The bride’s cake was a two-tiered confection of chocolate with peach, green and white icing. The initial C adorned the top of the cake. The groom’s cake featured two-tiers and was decorated with images of comic book Marvel heroes: Incredible Hulk, Iron Man, Captain America, Spiderman and Thor.

Guests were encouraged to enjoy Italian theme buffet of food and appetizers.

The groom’s mother, Sharon Case, was surprised with a special cake in honor of her birthday.

The groom’s parents hosted a rehearsal dinner on the eve of the wedding at Skye Tower Restaurant on the 20th floor of the Holiday Inn in Raleigh. The restaurant featured panoramic views of the city’s skyline. A formal dinner of prime rib, parmesan chicken or seasoned pork was served to the wedding party and guests. A special table featured photo collages of the bride and groom on their journey to marriage. Serving as proxy bride was Micah Allen, of Brookhaven.

A tea honoring the bride was held at the Olde English Tea room in downtown Wake Forest, North Carolina, given by Sandra Emerson. Various hot and cold teas were offered as well as small desserts.

Various showers were given to the couple prior to the wedding, including a shower honoring the couple, hosted by New Sight Baptist Church, the groom’s family church.  Collins and Micah Allen hosted a shower at their home given by family and friends.  Also a bachelor party was given by Don and Sarah Underwood.

Following a honeymoon trip to Paris, France, the couple is at home in Cary, North Carolina, where both the bride and groom are employed as nurses. The bride works for Rex Oncology, and the groom is employed in the transplant/trauma ICU department of Duke Raleigh Hospital.