A Brookhaven teen recently received a full academic scholarship to attend the University of Mississippi in Oxford this fall.

Jamie Sproles, 18, found out she would attend Ole Miss on a full academic scholarship in April, weeks before her graduation from Brookhaven High School. 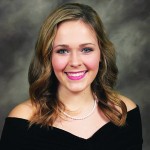 “The Mississippi Excellence in Teaching program is the program that’s giving me all of the money to cover everything,” Sproles said. “The only thing I have to commit to in order to get that money is to teach in a Mississippi public high school for five years after graduation. They will allow you to differ those five years, so you can get your master’s — which I plan on doing. That’s the only requirement and commitment that you have to make.”

Sproles applied for the METP at the beginning of her senior year, she said. The application process consisted of submitting her ACT scores, writing an essay and attending an interview, Sproles said.

“I wrote an essay and then they called me for an interview process,” Sproles said. “I was one point below the suggested ACT score which made me very nervous. They pick 10 English majors and 10 math majors, so it’s 20 students in all that are in each class. I definitely did not think that I was going to get it, but I am very happy that I did.”

She continued to express her excitement by saying, “I was very ecstatic when I found out. I think my parents were probably a little more excited than me. It seems like everything that I had been working toward is coming together. It is really just a huge blessing.”

Sproles plans to pursue her master’s and doctorate degrees after obtaining her undergraduate degree, in order to, first become a principal, and then become a superintendent.

“Both of my parents are teachers, so I have always grown up dealing with that, I guess you could say,” she said. “Ever since I was young, I’ve always been one to want to teach other people things and I’ve always just enjoyed school. It’s always been in the back of my head that I wanted to be an educator.”

Sproles decided to double major in public policy leadership through the Trent Lott Leadership Institute after attending a high school version of the program last summer.

“I got interested in it because I did the summer program for high school students last summer,” Sproles said. “I went and stayed at Ole Miss for a month. They pick 20 students to do the program and then they give teach them a simplified version of the program. We took two college classes and we went to (Washington) D.C. for a week. Doing high school program is what pushed me to do it in college.”

Between the METP, Trent Lott Leadership Institute and Honors College, Sproles expects to be extremely involved, which is no different from her high school career.

While at BHS, Sproles played the trumpet in the band, participated on the speech and debate team, mock trial, homecoming production, the National Honors Society, the tennis team and Girls Scouts.

Photo by Aaron Paden/John Pruitt shortens some boards Monday afternoon as he works to rebuild his supply of outdoor furniture.... read more