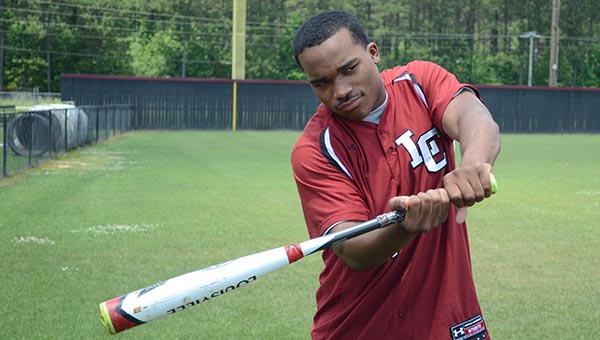 T-Tez Cole had a spectacular senior season for Lawrence County as the Cougars cruised through the regular season to finish with a 25-1 record and won the Region 6-4A division crown.

In the Class 4A state baseball playoffs, the Cougars roared past the first two rounds, eliminating Northeast Lauderdale and Forrest County, before being swept by the current Class 4A South State champs, Newton County.

Cole finished the season with a whopping .563 batting average as a designated hitter to lead the Cougars. Cole posted 13 homeruns, nine doubles and had 41 RBIs. His slugging percentage was an amazing 1.239 at the plate, and he had eight stolen bases. In the field, Cole had a .833 average, giving up only one error on the season.

In early February, Cole signed a duel athletic scholarship to play baseball and football for the Southwest Community College Bears.

To add to his many achievements, Cole has been selected as The Daily Leader’s Most Valuable Player and Mr. Baseball on the 2016 All-Area Team.

“I am honored to be named the All-Area Baseball MVP,” said Cole.

The All-Area team is led by a strong pitching staff – Cade Hodges and Levi Redd of Loyd Star, Josh Stephens of Lawrence County and Landon Gartman of Enterprise.

Receiving honors at the catcher position are Prentiss Anderson of Lawrence County, Hunter Richardson of Enterprise and Tucker Watts of Loyd Star.

In the outfield are Tucker Lambert of Bogue Chitto, Antonio Christmas of Franklin County, Marcus Atterberry of Lawrence County, James Beard of Loyd Star and Lofton Sills of West Lincoln.

Joining Cole at the designated hitter position are Seth Bivens of West Lincoln, Parker Flowers of Loyd Star and Bolan Tadlock of Wesson.

T-Tez Cole,  battled through some tough injuries to finish his senior year strong. Last season, Cole had to sit out the baseball season after suffering an injury to his hand.

This season, he sustained another injury during football, but he refused to give up and worked hard to get ready for the baseball season.

Due to his hard work and determination, Cole was selected as an All-Star and played in the 43rd annual All-Star baseball game Saturday.

“We had a great season and I enjoyed every bit of it. I will remember all the good times we had as a team,“ he said.

“Coach Josh Garrett is a great coach if you listen to him,” said Cole. “He knows the game and that is what helped us go far in the playoffs.”

Cole is ready to begin a new chapter in his baseball and football career at Southwest as he plans to pursue a career in agriculture engineering.

Cole, 18, is the son of Wakeshia and Lenoriss Cole. Outside of sports, he enjoys riding to the creek and hanging out with his friends.

“T-Tez Cole has been a big part of our program on and off the field. It makes me so proud to see him finish his high school career the way he has,“ Garrett said.

“Being named The Daily Leader’s All-Area baseball MVP is a huge honor for Cole,” Garrett said. “There are plenty of great players in our area and T-Tez is very deserving. He has been a trooper battling through injuries and to finish his career with this honor is a testimony to his hard work and efforts.”

On offense, he batted .366 while driving in 22 runs and six doubles.

Josh Stephens,  a senior, powered the Lawrence County Cougars on the mound with a 9-1 record. Stephens posted a 1.05 ERA with 56 strikeouts and 20 walks.

At the plate, he had a .319 batting average with 22 RBIs and three doubles.

Landon Gartman,  a freshman, compiled a 1.88 ERA record for Enterprise. He struck out 70 batters and allowed only 17 walks.

Tucker Watts,  a sophomore, paced the Loyd Star Hornets with a .452 batting average.

Carter Culbertson,  a senior, posted a .352 batting average for the Brookhaven Academy Cougars.

Jeremy Smith,  a junior, compiled a .436 batting average for the Wesson Cobras.

Blaine Moak  a senior, had a great year for the Brookhaven Panthers, with a .386 batting average.

Kylar Fielder,  a sophomore, helped the West Lincoln Bears advance to the Class 2A playoffs as he batted a .485 on the season.

Tucker Lambert,  a sophomore, directed the Bogue Chitto Bobcats at the plate with a .467 average on the season.

Antonio Christmas,  a senior, was a force in the outfield. He earned
a .459 batting average for Franklin County.

Marcus Atterberry  a junior, batted .375 for the LCHS Cougars.

James Beard,  a freshman, posted a .376 batting average for the Hornets.

Lofton Sills,  a senior, batted .444 for the West Lincoln Bears.

Seth Bivens,  a junior, was one of the leaders on West Lincoln’s team as he batted .413 on the season.

Bolan Tadlock,  a senior, posted a .392 batting average for the Wesson Cobras.

DeMartre Collins,  a junior, had a productive season for the Bulldogs. He batted .400.

Max Daughdrill,  a junior, provided a .400 batting average for the Wesson Cobras.

Clint Stephens,  a sophomore, orchestrated a .387 batting average for the Brookhaven Panthers.

Fisher Warren,  a junior, played a big role in the Brookhaven Academy Cougars’ season with a .384 average.

Madison Smith,  a junior, earned a .434 average at the plate for Brookhaven Academy.

Cade Cangemi,  a junior, had a productive season for the Enterprise Jackets as he batted .408.

Tyler Mixon,  a senior, provided leadership for the Brookhaven Panthers and led the team with a .369 batting average.