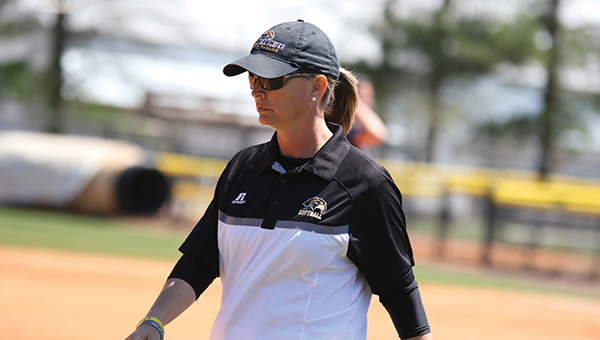 “We are excited about the addition of these three to the team,” Hogue said. “Their experience is going to be great for us.”

Carter, who was a high school teammate of Nelson, had valuable experience as a true freshman at Arkansas, pitching 40 2/3 innings. She hails from Paragould, Ark., where she produced incredible numbers. Carter struck out 352 batters as a freshman and had 860 in her first three years, going 79-17 in that span. The three-time All-State honoree also drove in 106 runs.

“Peyton Carter transferred from the University of Arkansas and we are looking forward to seeing what she can do in the black and gold,” Hogue said.

Crowson earned several Alabama Community College Conference Pitcher of the Week honors while pitching for Shelton State. She ultimately struck out 121 batters in 163 2/3 innings, registering a 1.58 ERA on the year. She ended the 2016 season with All-Region 22 First-Team Battery honors as well as making the All-Tournament team.

“Kimmy is coming from two great years at Shelton State, and she will be an immediate impact for us in the circle,” Hogue said.

Nelson started a pair of games and played in 34 for Mizzou as a true freshman. At Paragould High, she was a three-time all-state honoree, hitting .470 combined over her career there (.500 and .556 in each of her final years).
Nelson produced 131 RBI and won 26 games in the circle.

“Chase Nelson is one that we tried to get out of high school,” Hogue said. “She chose a different route and we are excited she ended back up at Southern Miss. She will help us a lot in the middle infield and in the lineup.”

The Golden Eagles are coming off their best season since 2004.