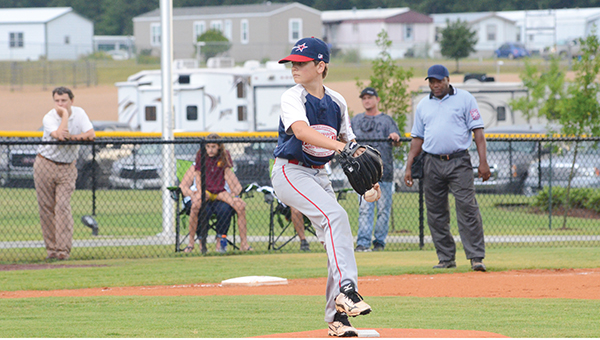 Photo by Anthony McDougle/
Judson Griffin delivers a pitch during the Lincoln Nationals game against the Pike Americans Wednesday at the Lincoln Civic Center
Baseball Complex.

Solid pitching and timely hitting were the keys to victory for the Pike Americans Wednesday night.

In a game that was closer than the score indicates, Pike Americans starting pitcher Peyton Badon had eight strikeouts and no walks to help lead his team to an 8-1 victory over the Lincoln Nationals at the Lincoln Civic Center Baseball Complex.

The victory secured the 12- under Ozones championship for Pike.  Since Pike had already beaten the Nationals once in the double-elimination bracket, a second game was not necessary.
Lincoln Nationals starting pitcher Judson Griffin went the distance in the losing effort, throwing five strikeouts with four walks.

The first inning saw both teams leave runners stranded on base.
Whit Price got the day started for Pike by reaching on an infield single. Brett Passman followed  with a liner along the third base line to put a runner into scoring position, but Griffin displayed solid pitching and left the two runners on base.

Darius Robinson got things going for the Nationals in the bottom of the first inning with a single. Robinsnon would eventually reach third after stealing second and advancing on a balk by Badon. However, third would be as far as he would go as Badon retired the next three.

The bats came alive for Pike in the top of the second inning. Brice Remley got the ball rolling with a double into center field and Ethan Lindsey would then reach after being hit by a Griffin pitch.
Josiah May followed that up with a single to right field to load the bases for starting pitcher Payton Badon.

Badon showed he could be a valuable asset at the plate as well with a two-run single into right field to give his squad a 2-0 advantage.

After Griffin committed a balk, another run would score for Pike to close out their scoring at 3-0.
Both teams remained relatively quiet for the next two innings.

The Lincoln Nationals did get into a tough spot in the fourth inning, but Kenneth Dixon made a timely defensive play. He was able to make a diving catch on a line drive to deliver an out and immediately tagged second to catch the baserunner headed for third.

The Nationals finally got on the board in the bottom  of the fifth inning.

After Riley Easterling hit a single and stole second on a wild pitch by Badon, Carter Holcomb hit a single into the outfield to bring him in. That would be the only run they managed in the inning, trimming the Pike lead to just two.

The Pike Americans responded in a major way at the top of the sixth to stretch their lead and essentially secure victory.
The inning was highlighted by RBI-singles by Lindsey and Jade Brewer, an RBI-walk from Price with the bases loaded, a score by Badon on a wild pitch and a Griffin balk.

Pike had 11 hits in the game and Lincoln had six with two errors.
As the champion of the tournament, the Pike Americans will now advance to state tournament play.

The loss marks the end of the postseason for the Lincoln Nationals.
Darius Robinson led the way for Lincoln with a double and single, while Brice Remley was the leading hitter for Pike with a double and two singles.