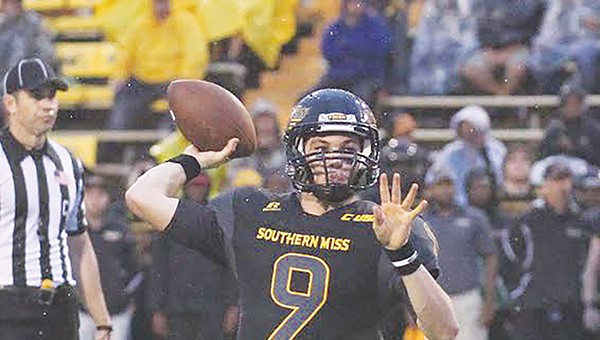 IRVING, Texas — Southern Miss senior quarterback Nick Mullens helps highlight the Conference USA Football preseason award winners by being named the Offensive Player of the Year, while five other Golden Eagles joined him on the preseason team in a vote taken by the league’s 13 head coaches.

Mullens, from Hoover, Ala., set several school records last season for the Golden Eagles as the squad finished 9-5, won the Conference USA West Division crown and earned its first bowl berth since 2011.

Smith, a junior from Semmes, Ala., rushed for a team-best 1,128 yards last season to go along with 515 receiving yards, and ranked second in C-USA last season in all-purpose yards at 134.0 per game.

Tom, a senior from Baton Rouge, La., returns at center for the Golden Eagles as a member of the Rimington and Outland Trophy watch lists, after helping the Golden Eagles to a school-record 7,133 total offensive yards a season ago.

As for defense, Bradley – a senior hailing from Macon, Miss. – had the most tackles of any Southern Miss defensive lineman from a season ago with 45 to go along with 12.5 tackles for loss and a team-best 6.5 sacks.

Antoine, a senior from New Iberia, La., led the squad in tackles with 103, along with 7.5 tackles for loss, 1.5 sacks, two interceptions, four forced fumbles and one recovery.

Nelson, Jr., a junior from Mendenhall, Miss., registered 59 stops a year ago with five tackles for loss, a forced fumble and a blocked kick.

Louisiana Tech had the most overall preseason selections with seven, while Florida Atlantic and Southern Miss each had players comprising six spots.  Old Dominion and UTEP both placed five players on the team.  All 13

C-USA schools that will compete for this year’s championship had at least one player named to the squad.

Dan Mullen needs to name a starter at QB

Many not may be willing to admit it, but every football fan would like to believe they know all there... read more