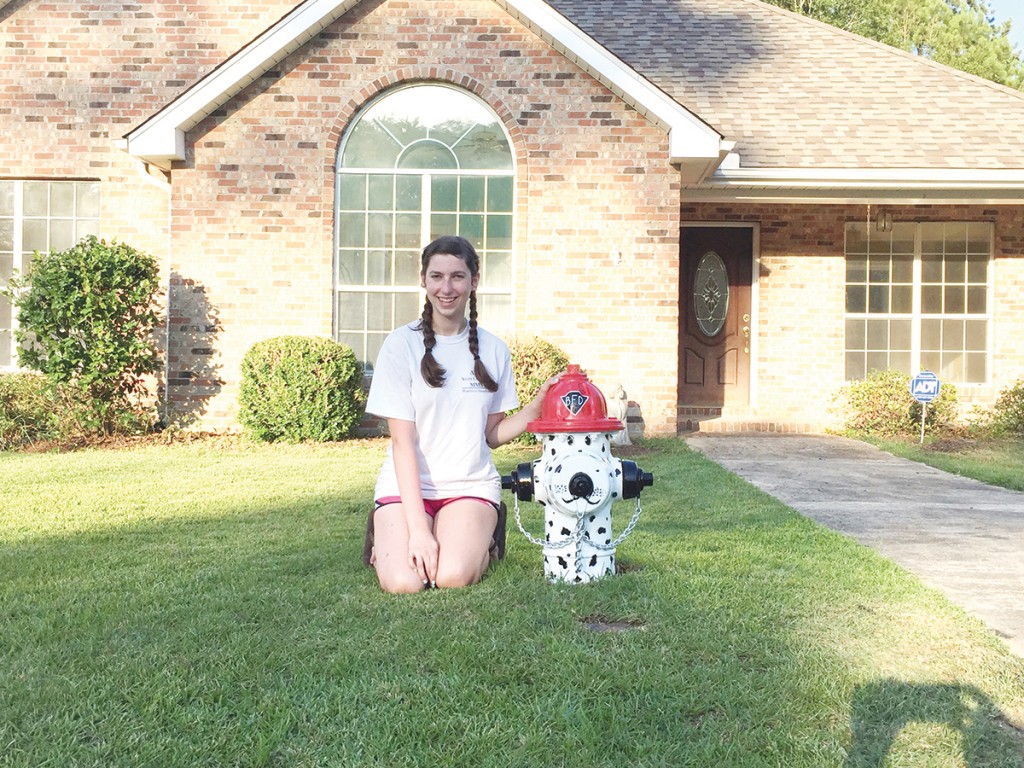 Photo submitted/Anna Katharine Thornton painted the fire hydrant in her grandmother’s front yard in Fisher Park to look like a dalmatian firefighter.

When Millie Owens bought her home in Fisher Park, she loved everything about the cozy, picturesque neighborhood. Everything, that is, except for the fire hydrant planted smack dab in her front yard.

Owens, a McComb native, had lived in Brookhaven for enough decades that she considered it home. When it came time to downsize to a smaller house and yard, she chose Fisher Park.

Everything was perfect, except for the eyesore of a fire hydrant that sprang up out of the lush, green lawn.

Then she remembered a trip to Hattiesburg she’d taken a year ago, while riding around with her husband.

“I saw where someone had painted a fire hydrant,” she said. “I thought that was so cute, and it enhanced the property. When I purchased this home, I immediately thought, ‘I’ve got to paint it.’”

Owens enlisted the help of her 16-year-old granddaughter, Anna Katharine Thornton of Fairhope, Alabama, to transform the steel and iron hydrant into something whimsical and eye-catching.

“She’s very artistic,” Owens said. “She’s taken art lessons since she was a little girl and she’s taken a class at her school. She loves art. It’s a gift for her. Some of her paintings are just beautiful that she’s done.”

Together they perused the internet to get some ideas. The found several photographs of hydrants that looked like gumball machines, college mascots, an American flag and even a one-eyed yellow minion, but it was the dalmatians that caught their attention.

“She and I both love dogs and I said, ‘We’ve got to have a little dog in the front yard,’” Owens recalled.

While in a store last week to pick up some red, black and white paint for the project, she was overheard by another shopper as she talked about picking out a suitable name for the hydrant.

So Soggy it became.

Owens checked with the Brookhaven Water Department to get permission and then Anna Katharine, visiting on a recent weekend, began the two-day project.

She covered the hydrant with a white primer coat, then finished it up the next day. One of her final details was to paint BFD on the dalmatians red helmet, to honor the Brookhaven Fire Department.

While Anna Katharine sat on a stool and painted, her mother, Jennifer Thornton, worked in the flower beds and her 14-year-old brother, Grant, helped their grandmother clean out the gutters. Owens said she tried not to peek during the painting process.

She’s overjoyed with the final product.

“I’m just so happy,” she said. “It reminds me of the day we painted and what a good time we had.”

Owens hopes her artsy fire hydrant will inspire others to paint theirs as well. “It just makes it look nicer, and makes the town look nicer,” she said.

To Owens, the fire hydrant also serves as a reminder to acknowledge the fire and police departments and what they do for the city every day.

“They really put their lives on the line for us,” she said. “I want to pay tribute to them for what they do for us and our town.”

File photo/Exchange Club Fair, hosted at Exchange Club Park, will kick off this year on July 30, and will be... read more