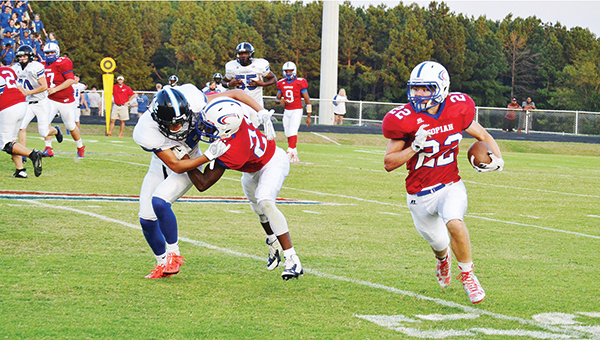 However, one game against Trinity Episcopal was the deal-breaker for Copiah Academy senior running back Landon Murphy.  In that one game he put up numbers it takes most running backs around three  games to attain.

Surprisingly, Murphy said his most memorable moment from last season was in a different game.
That play was an 85-yard kickoff return in a 48-2 victory and was memorable not for the play itself but for sentimental reasons.

“That was the first touchdown I had scored after Jay (Holloway) died,” Murphy said.
“I was frustrated before that because I wasn’t doing as well as I thought I should have been. Once I got it, a feeling came over me and I knew I was going to score.”

The senior said once he reached the endzone, he held up the number 9. Nine was the number Copiah Academy quarterback Jarius “Jay” Holloway donned for the Colonels. Holloway was killed in a car crash on a Tuesday morning last September.

Though Murphy admits football is his sport of choice, he also competes in track, baseball and soccer at Copiah Academy.
Soccer is his second preference. He tallied around 20 goals as a striker last season.
In track he runs the 100 and 200-meter dashes, 400 and 800-meter relays and competes in the long jump.

He plays left and center field in baseball.

Despite being a more than capable athlete in any sport he chooses to take up, football is where he truly shines. Last year, he totaled 1,468 yards rushing and 15 touchdowns.

He also contributed receiving out of the backfield and in the kicking game, where he had five  receiving touchdowns and  two return touchdowns. Copiah Academy head coach Paul Anderson called Murphy a competitor in the truest form.

“Landon is one of the best running backs in the area. He wants to get something out of everything,” Anderson said. “He is a great leader and he let’s his play do the talking for him.”

Murphy’s strongest assets as a running back are his speed and agility. A glance at his film would showcase an uncanny ability to make runners miss out in the open field.  He may  have one of the deadliest sidestep juke moves in the area.

After adding about 15 pounds to his 6-foot-1 frame in the offseason, Murphy said he hopes to add a bit more physicality to his style of play.

Recently, the senior standout traveled to regional developmental camps in Atlanta, Georgia, and Arlington, Texas, to try out for the USA football team. He said he will  find out if he made the team later in the summer.
Murphy said his goals for the upcoming season are to rush for more than 2,000 yards and 20 touchdowns.

As it stands, he has no collegiate offers but says if does not receive any he plans to attend Ole Miss and major in English with a minor in political science.  After attaining that degree he would like to attend law school.

With his  final season at Copiah Academy fast approaching, Murphy said he will miss the bond he has built with his teammates and the bright Friday night lights.

“When you get older and your not playing anymore, you’re going to miss everything about it,” he said.  The PrimeTime 23 list is a compilation of the top 23 players in the area. The next member of the list will be revealed in Friday’s edition.