Owen is the Bears’ deadliest weapon 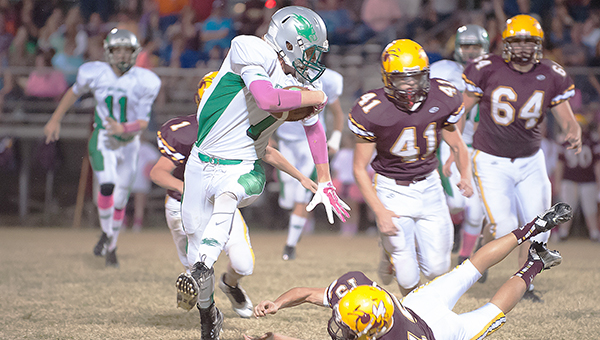 It is no secret that most of the coaches in the area implement run-first oriented offenses.
With such a high level of talent at the position, it makes sense that most coaches would defer to hand the ball off out of the backfield.

It milks the clock, it wears down a defense physically and mentally and it is almost assuredly one of the most surefire ways to avoid costly turnovers.

However, when a situation — or in this case an athlete — comes along that almost demands the ball be thrown coaches are obligated to answer the call.

Situations like that are few and far between.
When they come along though, they can break a team’s offense wide open and send a defense into a frenzy.

In a season that saw the Bears capture only two wins, Owen was the bright spot.
In his sophomore campaign, he caught 41 passes for close to 800 yards and 11 touchdowns, which was good for around 20 yards a catch.

Had it not been for an untimely injury late in the season, Owen would have easily eclipsed the 1,000 yard mark receiving.

He went down with a hip injury halfway through West Lincoln’s game against district opponent Amite County. Owen said the injury was one of the hardest things about last season.

“It was hard not being out there when I really felt like I was needed not only to make plays but also as a leader,” the junior said.
“But it taught me not to take anything for granted and enjoy every minute of it.”

Owen added that he tried to play the next game but the injury worsened and he was forced to sit out.

“It kind of seemed like some people were losing faith when I got hurt,” he said. “Even though I was out I still tried to keep everyone positive on the field.”

Before he was sidelined with the unfortunate injury, Owen was able to deliver a historic moment during the season for West Lincoln.

During the Bears’ game against Bassfield, Owen was able to reel in a touchdown pass. The score marked the first time in school history West Lincoln scored on the Yellowjackets.
Owen said he was proud of the accomplishment, but not quite satisfied.

“I want to score on them twice next time,” he said.

Though Owen clearly has an affinity for the position he did not originally play the position.

Until his ninth-grade year, he lined up at cornerback.
Then, while the Bears were on the wrong end of a game against Loyd Star, he was put in at receiver.

“They put me in and threw me a fade route,” he said. “I caught it and scored a touchdown and I have been playing receiver since then.”

As a receiver, Owen said he believes his hands are his strongest attribute.
“If you throw it in my vicinity 90 percent of the time I’m gonna come down with it,” the junior said.

He added that his weakest was his speed, but said that he is in the process of improving his 40 time.
In the offseason he has attended speed camps and ran several drills built to help get his 40 time down. He said he aims to get it down to around a 4.7 or 4.6.

“Chase is the kind of player that goes above and beyond what is asked of him,” he said.
“On the field he is a commander. He reads the field and his defenders well and can play off them,” Owen’s head coach said.

Jackson also said Owen has  a great knowledge of the game.

“He logs more time watching film than anyone. He’s disciplined and on a mission to set himself apart,” Jackson said.
“He isn’t selfish either. He will do what it takes to help the team and he doesn’t get upset if he doesn’t always get the ball.”

Looking forward to this season, Owen said he would like to avoid injury and have over 1,000 yards receiving and more than 15 touchdowns.
He also wants his team to win at least five games and reach the playoffs.

The game he is looking forward to the most is Bassfield.

The PrimeTime 23 list is a compilation of the top 23 players in the area. The next member of the list will be revealed in Sunday’s edition.