Cougars off to 4-1 start this season 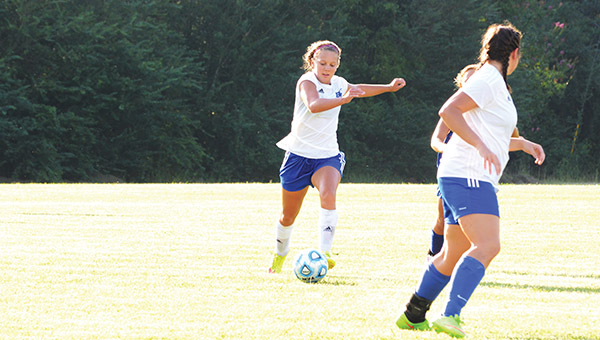 Photo by Anthony McDougle/
Brookhaven Academy’s Juliana Mills moves the ball up the pitch during Tuesday’s game against Discovery Christian School at the Hansel King Sports Complex. Mills scored three goals on the day to help lead her team to a 6-0 victory over Discovery Christian. With the performance, Mills also registered her third hat trick of the season. Also scoring for the Cougars were seniors Shelby Flumm and Anna Morgan Smith. Flumm has scored nine total goals on the season and Mills has tallied 10. Head coach Mark Leblanc said he has been pleased with the way his team has played, but added that he would like to see them pass the ball better and finish opportunities close to the goal. The Cougars’ next game is Aug. 15 at home versus district powerhouse Laurel Christian.