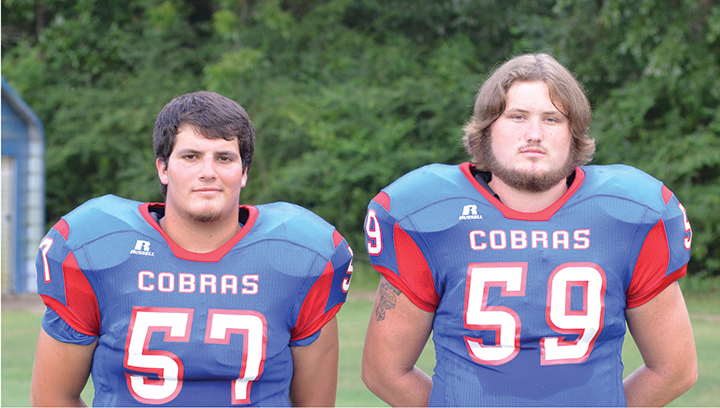 Photo by Anthony McDougle/
Matthew Craft (left) and Bobby Pritchard look to lead the way on the offensive and defensive lines for the Wesson Cobras in 2016.

Talent is crucial in the game of football.
A coach can teach a player how to properly tackle, or to catch with their hands away from  their body or how to throw a spiral.

But the one thing that cannot be taught is talent. It is something that is either there or it is not. Period.
Leadership is probably just as pivotal to the success of a football team.

Even with talent a head coach has to have a player or two who is an on-field general.

A cooler head that will prevail when younger, less experienced players may panic on the field. It is a quality most coaches would welcome just as quickly as they would welcome top tier talent.
Having one of the two aforementioned qualities is great, but a player that has both is a gamechanger.

At Wesson, head coach Jeremy Loy has the duo of Bobby Pritchard and Matthew Craft serving as  the leaders of his offensive and defensive lines.

On defense Pritchard was a force to be reckoned with during his junior year.
The second team All-Area defensive end had 57 tackles, six sacks and three fumble recoveries last season.
He also spent some time playing offensive line.

Pritchard is the type of player who gives it his all on every play. That quality of his was evident in what he calls his most memorable play from last season.
He said he tries to stand out by going full out every play.

“I just try to give it all I got and work hard every play.”

He said he loves the challenge the game offers.

“Football proves who the real men are,” he said. “Anyone can say they went out and played but it takes a man to stay with it.”

During their game last season against Hazlehurst, Pritchard was able to run down the Indians’ running back from the opposite side of the play.
That is just one example of how Pritchard leads by example. Though he may not be the most vocal player in the locker room, his play speaks volumes.

Craft, like Pritchard, leads by example and lets his play do the talking.

Also a second-team All-Area selection, Craft graded out at 90 percent in his junior year and tallied six pancake blocks.

Craft made contributions on defense as well as he tallied 26 tackles and a scoop-and-score against Franklin County  that he said was his most memorable play from last season. However, he said he enjoys playing on offensive line more.

“I have a lot of plays I like on offense because I get to be a pulling guard,” he said.
As a leader, Craft said he wants to be able to steer the younger players on his team in the right direction.

“I just want to exhibit leadership and help these young guys get everything down,” Craft said.

At 235 pounds, he may not be as big as a lot of the players he will line up against, but Loy said Craft plays much bigger than his size.

“Matthew stays on his blocks really well,” he said.
“They both are really strong in the weight room. They have strong lower bodies and they get off the ball quickly.”

Loy said the effort the two exhibit is what makes them leaders of the Cobras heading into the 2016 season.

“Both of these guys give great effort every snap,” Loy said. “They don’t take plays off, they’re tough and they never want to come out of the game.”
“If I could get everyone to do it the way Matthew and Bobby do it, we would be in good shape.”

Entering their senior year neither player had any specific individual goals set yet other than to improve their performances from last year.
However, each player did have a similar goal for their team.

“A state championship,” they said, “hopefully.”

The Primetime 23 list is a compilation of the top 23 players in the area. The next member of the list will be revealed in Tuesday’s edition.