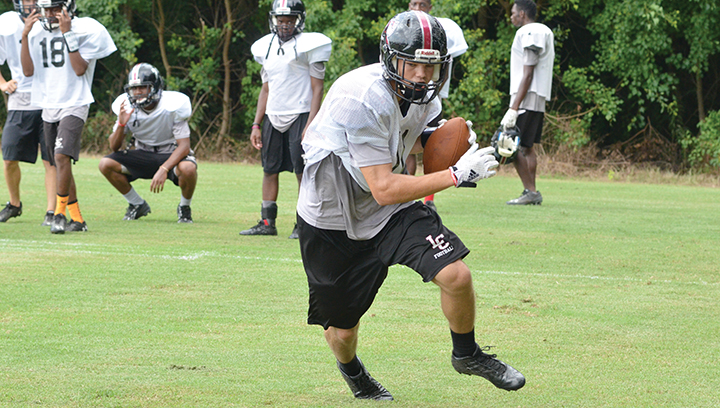 Photo by Anthony McDougle/
Azar Myles returns as one of the leading tacklers for Lawrence County. He and Kemarcus Brown combined for almost 250 tackles during the Cougars’ 12-1 season. 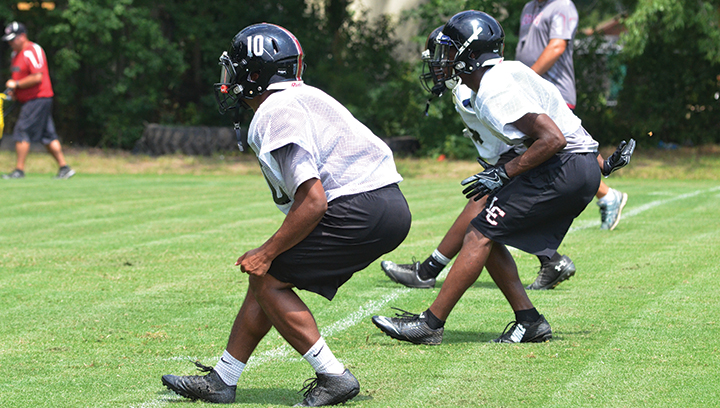 Kemarcus Brown returns as one of the leading tacklers for Lawrence County. He and Azar Myles combined for almost 250 tackles during the Cougars’ 12-1 season.

Once he grasped the concept, Boucher became a menace to offenses.
Apparently Boucher and Klein passed that recipe off to Lawrence County’s Kemarcus Brown and Azar Myles.

Last season, the two defenders put on their best impression of the 31-year-old linebacker and combined for 232 tackles and 27 tackles for loss.

At a glance, many would assume that both players lined up at linebacker for the Cougars. However, only Myles played the position while Brown served as strong safety in 2015.
At the safety position he did spend some time in the box for the Cougars but spent more playing back as the team’s last line of defense.

Brown said his versatility is one of his best assets.

“I would consider myself an extra linebacker depending on the situation, but I really can play anywhere,” he said.
“I’ll do whatever I need to do to help my team win.”

At only 5-foot-8, Brown said he sometimes feels like the opposition may overlook him. However, the senior added that he feels it gives him an edge in his game.Because of his small stature, Brown said a player he tries to mold his game after is Seahawks safety Earl Thomas.

“He is where he is supposed to be at all times,” the senior said of his favorite player.
“Even if you don’t necessarily see him, he’s there.”

When asked if he considered himself a heavy-hitting safety or a gamechanger, he said he felt he could be both for his team.

“I’m not more of one than the other, but I think I can do a little bit of both,” he said. “I don’t want to give myself too much credit,” he said.

Brown’s head coach Jaymie Palmer also said his versatility, along with his football mind, were what made him special.

“Kemarcus can play any position you put him in. If you ask him to play guard he’ll play that,” Palmer said.
“He’s like programming a computer.”

That type of mentality is a trait that Brown and Myles share. Myles is a soft-spoken player who prefers to let his play on the field speak for him.

The senior linebacker will now take the reins of the defense after the departure of standout linebacker T-Tez Cole.

Cole had 187 tackles and 28 tackles for loss last season and most of that production is likely to shift to Myles.

“Last season was good for me,” he said, “but I could have done better.”
“This year, I just want to do whatever my team needs me to do in order to help us win.”

Myles said he feels the defensive unit will look to him as a leader now that Cole has graduated and acknowledged that it may be a little pressure, but he will be ready to step up to the challenge.  He said he learned a lot about defenses last season by watching a lot of film and paying attention to what formations defenses line up in and the way they move.

Palmer said Myles possessed several abilities that made him stand out at the linebacker position.

“He has good instinct, he is very smart and he watches a lot of film,” he said. “He also is an outstanding open field tackler and does well in pass coverage.”

Myles said he looks up to former Ravens linebacker Ray Lewis not only for how he performed on the field, but for what he had to overcome to get there.

“He was homeless and he didn’t have his father in his life at one point,” Myles said. “But he followed his dream and he kept working hard.”

Being the type of player to put his team before personal goals, Myles did not have any specific goals for himself. He said he only wants to improve on his output from last season and help his team to a winning season.

“I just want to try to make plays when they come to me because opportunities don’t come often,” he said.

Brown had a few goals set for himself, but also set the goals of the overall unit over his own production.

“I’d like to get between five and 10 interceptions this year,” he said,  “and score on the receiving end.”
“I also want us to get back to the playoffs.”

Both players also would like to receive a football scholarship, but plan to attend college regardless.
Myles said he would like to be an airline pilot or a minister and that he does not have a preference of the school he attends.

Brown said he was unsure of his career path or where wants to go to college, but stated that he would not mind if he did not get any offers to play at the next  level.

“It wouldn’t bother me if I don’t get an athletic scholarship because I know I’m smart enough to succeed in college,” he said.
Myles and Brown both agreed that it would take a joint effort from all units on the defense to help the team have a successful season.

“The defense needs to work hard,” Myles said. “The defensive line needs to keep applying pressure so the gaps can open and the players at the next level need to make the plays when they come.”

The Primetime 23 list is a compilation of the top 23 players in the area. The next member of the list will be revealed in Thursday’s edition.