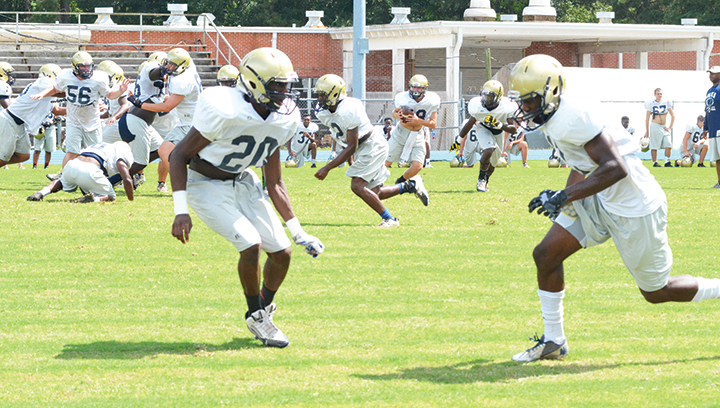 Photo by Anthony McDougle/
Junior Deione Buckles is one of the best cornerbacks in the area in 2016 and is looking to make a big impact for Franklin County this season. 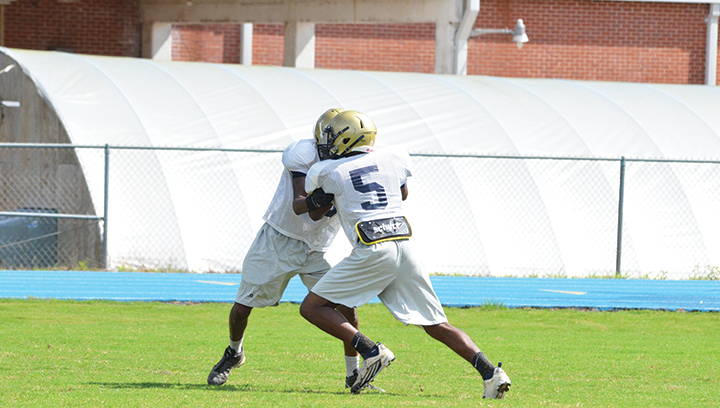 Photo by Anthony McDougle/
Junior Keonte’ Bee is one of the best cornerbacks in the area in 2016 and is looking to make a big impact for Franklin County this season.

Football in this day and age is played through the air. The days of running the ball every play are gone and replaced with high octane offenses that spread defenses out and move the ball vertically downfield.

Because of this advent, quality defensive backs are becoming more of a necessity than ever before. Teams need at least one cornerback they can depend on to hold the opposition’s best receivers in check.

Luckily for Franklin County and head coach Trey Woodard, they have two of the best in the business in Keonte’ Bee and Deione Buckles.

Because of his second team All-State selection, Bee is the more prominent name of the two.
In his sophomore season, Bee had six interceptions, 36 tackles and deflected 14 passes. He said his most memorable interception came during his first playoff start in a game against St. Andrews.

“We were in man coverage and coach changed to Cover 3,” he said. “The receiver had been talking trash the whole game and when they finally threw the ball my way, I just seized the opportunity, caught it and ran it back to the five-yard line.”

Bee said he considers himself a shutdown corner and added he prefers man coverage to zone coverage.

Woodard said Bee’s competitive edge is what makes him a special corner.

“Keonte’ is a competitor. He just wants to be the best. He just competes. He may not always be the most vocal guy but he always wants to compete,” the head coach said.

Because of his ability to guard any receiver and his competitive drive, Bee said he likens his game to New York Jets cornerback Darelle Revis.

“I like the confidence and swagger Revis takes out onto the field,” he said.

Bee also spoke repeatedly about the love that one must have for the game of football in order to succeed.
Because of that, he also said deceased Redskins defensive back Sean Taylor was someone he looked up to.

“I watch a lot of tape on Sean Taylor from his pro days and his days in Miami. He had that love and passion for the game that a lot of people don’t have,” Bee said.

Bee’s name may be more well-known, but Buckles is far from a slouch and has proven to be just as reliable as his counterpart.

“Deione is a talented cover corner and he plays his technique really well,” Woodard said. “It’s hard to find mismatches when you have him and Keonte’ out there.”

Buckles totaled five interceptions,  42 tackles and nine passes deflected in his sophomore campaign.
His most memorable moment from last season came in a crucial moment against district rival Jefferson County.

“Before the play started, coach kept telling me that it was about to be a big one,” Buckles said.

He said once the offense lined up three receivers to his side, he knew the ball would be coming his way.

“When the quarterback threw the ball, I went at it with no hesitation. I  caught it one-handed and slid to close the game out,” he said.

Buckles is a multi-sport athlete at Franklin County. He also plays basketball and runs track.
He said football is his favorite though, and cornerback is his favorite position.

“There’s just something about playing corner. It feels right to me,” he said.

Like Bee, Buckles said he also fancies himself a lockdown cornerback. As such, his favorite player is one of the best shutdown cornerbacks in the game, the Arizona Cardinals’ Patrick Peterson.

“Patrick is a lockdown corner and he has confidence in himself.  Every night he goes out and holds the best receiver every play, every game,” he said.

The Primetime 23 list is a compilation of the top 23 players in the area. The final member of the list will be revealed in Friday’s edition.