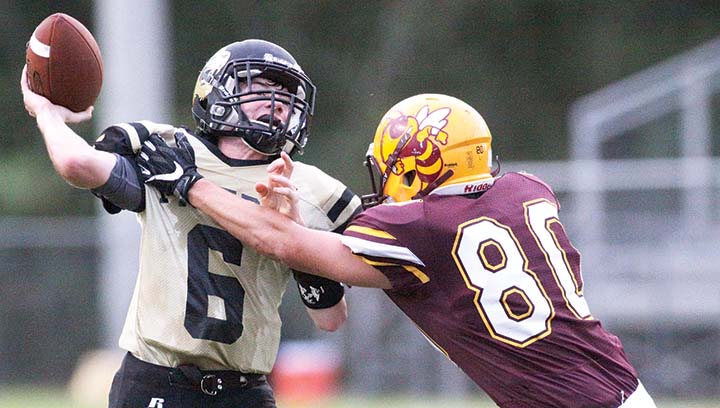 The Enterprise Yellow Jackets opened up the 2016 football season with a 36-14 victory over the Ethel Tigers Friday.

From the start of the game it was clear both teams wanted to establish their running game.  The Yellow Jackets drew first blood with 8:01 left in the first quarter, as Enterprise’s Zach Hodges scored from 31 yards out. Enterprise took a 6-0 lead into the second quarter after failing to convert the two-point attempt.

The Tigers’ defense held strong after the miscue and were able to regain possession for their offense. With 1:48 left in the half, the Yellow Jackets forced the Tigers into a fourth and 6. The Tigers elected to go for it, but the Yellow Jackets’ defense was able to register a big stop. After getting the ball back the Jackets responded with another score. With 12 seconds left in the half, Hodges connected with Cody Leggett for a 25-yard  score. Enterprise took a 18-0 lead into halftime after failing on the two-point try.
Just as they had in the first half, the Jackets continued to lean on their running game after halftime. With just over 11 minutes on the clock, Hodges was able to reach the endzone yet again, this time on a 20-yard run.

On the Tigers’ opening drive of the third quarter, they were finally able to move the ball on the ground against the Enterprise defense.  With 9:15 on the clock, the Tigers’ Hayes Wood ran the ball in for a one yard score, but Ethel could not punch in the two-pointer.

Almost on cue, Hodges broke through the Enterprise defense yet again and scored a touchdown after a 33-yard run. The Tigers notched their final score of the game in the fourth quarter, as Tanner Reeves scored on a five-yard run and they made the two-point conversion.

A five-yard run by Marvin Butler with 5:52 remaining closed out the scoring for both teams on the night.

“The boys played hard. Thought we put it together in the first and fourth quarter. Had a lot of young players step up and played very hard,” Ethel’s head coach Brad Grey said.

Enterprise will be in action Thursday night, as they head to Bogue Chitto to take on the Bobcats. Kick off is slated for 7 p.m.

Panthers, Bulldogs to face off

With the first game of the KDMC Kickoff Classic in the books, all eyes will be on the second contest... read more