A Brookhaven family is outraged about the way they say administrators at Brookhaven Elementary School handled a dress code violation Wednesday.

In an emotional Facebook post, Robbie Nettles, the family spokesperson, expressed his disappointment in the way the school handled a clothing situation involving his 9-year-old niece.

The 9-year-old girl’s top and pants were deemed inappropriate and in violation of the handbook, Nettles said. 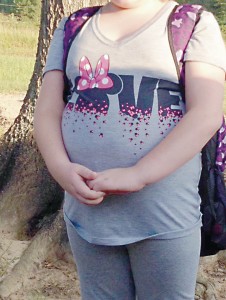 Photos submitted/Robbie Nettles’ niece was pulled from class for violating the Brookhaven School District’s 2016-2017 Parent/Student handbook for the following outfit.

“It was a combination of both,” Nettles said. “They had an issue with the outfit totally.”

In the pictures posted to Nettles’ Facebook, the child wore a gray knit top with the word Love across the front. The top seemed to be tight around the child’s torso. She also wore gray cotton pants that resembled leggings. The second picture Nettles posted showed the outfit his sister brought to the school for the child to change into. The second outfit featured a gray cheetah print top and the same gray cotton pants.

The handbook states, “all tops must be size appropriate and should neither be overly baggy nor overly tight” and “tights or leggings/jeggings worn as outer wear, spandex, bike shorts, bathing/swimming wear, sleep wear (including pajamas), are not permitted.”

“A lot of speculation on my Facebook came from her pants,” Nettles said. “People were asking if she was wearing cotton leggings. They were not. They were cotton pants. My niece does own a pair of leggings, but my sister (her mother) would not let her wear them to school.”

Nettles said his family would not purposefully let his niece wear something that put her in violation of the dress code or set her up to be made fun by other students.

“Because of my nieces’ body, if she wears a larger shirt it comes past her knees, which is in violation of the dress code,” Nettles said. “The main thing I want to see come out of this is positivity. No 9-year-old should have to deal with this situation and be made to feel criticized about her body weight.”

Brookhaven School District Superintendent Ray Carlock said he could not comment on a situation involving individual students, but that the school followed the procedure outlined in the handbook for dress code violations.

“After I investigated it, our principal followed the handbook guidelines to the letter,” Carlock said. 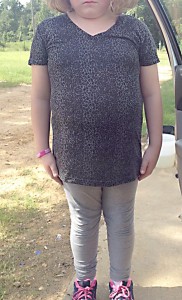 Photo submitted/Nettles’ sister brought his niece a this following change of clothes after she was removed from class. The school deemed the second outfit in violation of the handbook as well.

Nettles said the school did not handle the situation by the procedure outlined.

“My initial question to my sister was about where my niece got held until she could bring her a change of clothes,” Nettles said.

Nettles said he was upset when he found out his niece was sent to in-school suspension instead of the office to wait for his sister to bring a change of clothes.

Carlock could not be reached again to confirm or deny whether the child was held in ISS or in the office as the handbook outlines.

Nettles said his sister signed the school’s handbook for his niece and returned it to the school.

When Nettles’ sister brought his niece a change of clothes, the school decided the second shirt was still in violation of the dress code.

Nettles said he could not release any more information about what was said between his sister and school officials or if his niece returned to school Thursday.

Because of the response Nettles’ post received on Facebook, his family decided to seek legal counsel, which advised him not to release details of the encounter.

“I’m very worried about the consequence of me putting this out there,” Nettles said. “I don’t want anything to come back on me or my niece.”