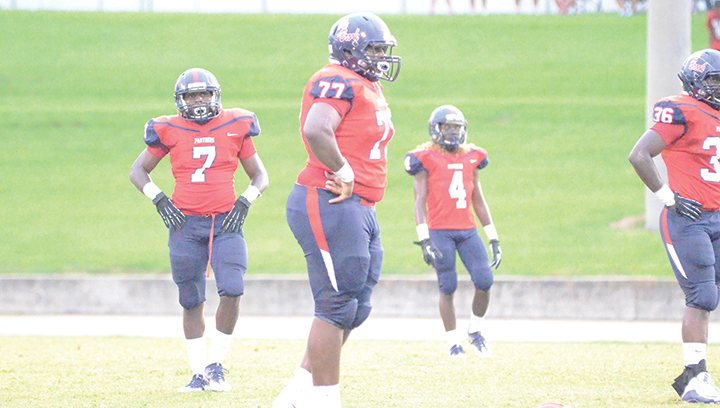 At the end of the first quarter, it was still anybody’s game. In fact, during the early portions of the game, the Panthers were out in front after sophomre quarterback Sevante

Quinn completed a 14-yard touchdown pass to receiver Jaleel Mitchell with 6:36 left in the first quarter.
Northwest Rankin answered with a score of their own as time expired in the first and made the field goal attempt to take the lead 7-6.

The Panthers had a good outlook heading into the second quarter. They seemed to be on the way to avenging their loss to the Cougars from last season.  Then, the home team’s offense started to come alive.

Senior quarterback Braden Smith got the scoring barrage started with a 69-yard run to the endzone with 8:08 left in the second to put his team up 14-6.

Soon, another touchdown would follow, and another. By the half the game had gone from managable to on the brink of getting out of hand for the Panthers.
Northwest Rankin scored two more times in the third quarter to all but seal the deal.

Quinn went 8-14 for 143 yards and two touchdowns, but he also lost a fumble during the contest.

Kenneth Dixon had 15 carries for 85 yards, while Demarrell Leggett added 43 yards on 15 touches.
Ole Brook receiver DonBlandon had two receptions for 81 yards and one score to lead all receivers.
Fellow wide receiver John Hilbert caught two passes for 34 yards on the night.

Defensively, Isaiah Wall led the way for Ole Brook with seven tackles. Nose guard Jeffery Johnson tallied four tackles and a sack, while defensive backs Jemaurian and Axavain Jones each had one interception.

Ole Brook head coach Tommy Clopton said he felt his team did not execute in key moments on either side of the ball.

“There were some times when we had them on third down, but we didn’t contain their quarterback,” he said. “Defensively, I think we did some things well on first down and we need to work on executing better.”

It was a tough loss for the Panthers but Clopton said they will look to next week’s game against Lawrence County and try to build on this week’s disappointment.

“After the game, I just told them we have to stand our ground when things don’t go our way.
“We can let a loss tear us down or we can learn from it and be better,” Clopton said.

The Panthers will return home for a much anticipated matchup with the Lawrence County Cougars Friday. Kickoff at Ole Brook is set for 7 p.m.