The seventh-ranked Copiah-Lincoln Community College Wolves may have scored 44 points in their season-opening win over Mississippi Delta, but the defense stole the show.

The unit was absolutely overwhelming, getting to the quarterback numerous times and forcing a few turnovers in the process en route to a 44-0 shutout victory over the Trojans at Stone Stadium Thursday night. The Wolves held Miss. Delta to 62 total yards in the victory. 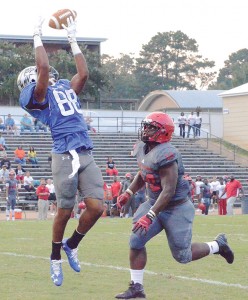 Photo by Anthony McDougle /Co-Lin wide receiver DeAndre Barnes goes up for a catch in the first quarter of a win over MS Delta Thursday night at Stone Stadium.

“For not knowing a lot of what we would see from this team, our kids played really well tonight,” Co-Lin head coach Glenn Davis said.

Davis said he was pleased with the effort his defense put forth in the shutout.

“We have got some players on defense. We just need to make sure we are playing to the best of our potential.”

The Co-Lin offense totaled 224 yards on the night and was led by quarterback Dominic DeLira. The redshirt freshman passed for 128 yards and two touchdowns in the win.

“We have been waiting for the season to start since fall camp,” DeLira said after the game. “We came in with one mission and one goal. It felt good to be out there.”

Sophomore running back Ladarius Galloway led all rushers with eight carries for 55 yards and a pair of scores. DeAndre Barnes led the receiving corps with two catches for 49 yards.

The Wolves notched their first score of the day at the end of drive that saw them go 77 yards down the field.

Galloway carried the ball for a score from six yards out at the end of the drive to give his team a 7-0 lead.

Less than two minutes later, the Wolves put more points on the board, but this time it would be by way of the defense. The Wolves’ defensive line applied pressure to the Trojans and managed to sack their quarterback in the endzone for a safety to bring their lead to 9-0. Their final score of the quarter came when Galloway punched in a touchdown from five yards out to make the score 16-0 in favor of Co-Lin.

Early in the second quarter, Co-Lin faithful saw a glimpse of what Oregon State transfer wide receiver Datrin Guyton brings to the table. The 6-foot-5 wideout caught a pass from DeLira and took it 12 yards for the score.

The defense would add more points to the Wolfpack lead in the second quarter when linebacker Michael Graham stepped in front of a pass and returned it 25 yards to give Co-Lin a 30-0 lead.

Graham said the pick-six was the first of his collegiate career.

“When I saw the lineman pulling, I knew it was a screen,” he said. “I went in looking for the running back and ended up with the ball.”

Co-Lin further extended its lead on a four-yard run by sophomore running back Josh Ferguson and tallied the final score of the night after wide receiver DeAndre Barnes caught a pass from DeLira and broke a few Trojan tackles on his way to a 17-yard touchdown.

Moving forward, both units acknowledged that there is still much to be done in what is a young season.

“We know we can be one of the best offenses in this conference. Luckily we get the chance to go against a tough defense in practice, but we just have to keep polishing everything,” DeLira said.

As for the defense, Graham said he felt the unit needed to make sure to stay on the same page.

“We need to stay hungry,” he said. “We don’t need to get cocky or let anything go to our heads and remain the same defense that we were in the offseason.”

The Wolves will face Coahoma at home Thursday. Kickoff at Stone Stadium is set for 7 p.m.

Stars align in Dallas for rookie

About three or so years ago, a young and ambitious college student decided to pursue his education at Mississippi State... read more