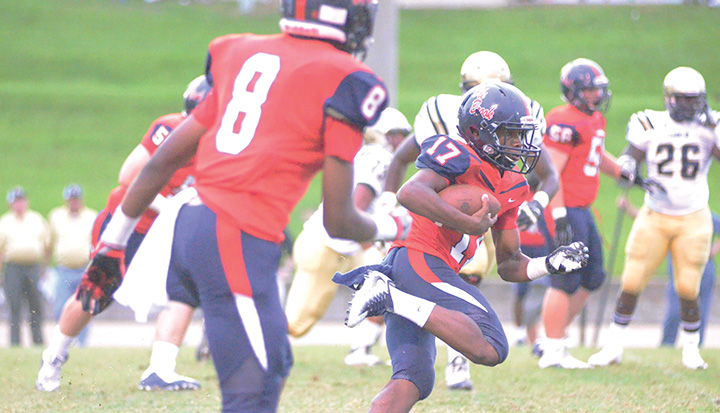 The third week of the football season is upon us. As the season progresses, several teams have began to get into the “meat” of their schedule and the talent level of the competition begins to steadily increase.

The district slate is slowly approaching for several teams, so many will be looking to end non-district play on a good foot over the next few weeks.

This week, one of the most exciting matchups in the coverage area will be no less than a mile away from The Daily Leader’s office.

At Brookhaven High School, the Panthers will face the Lawrence County Cougars in their first true home game of the year. Ole Brook is coming off a 41-13 road loss to Northwest Rankin, while the Cougars suffered a 44-38 overtime  loss at home to West Marion.

Both teams will be looking to right the ship tonight in a game that has developed into a fierce rivalry.

Last year’s matchup saw the Cougars beat Ole Brook 55-33. The 2016 version of this contest should offer just as much offensive firepower. For the Cougars, Primetime 23 quarterback Charl’Tez Nunnery will supply most of their yardage. The senior has 293 passing yards and three touchdowns on the year and has also rushed for 260 more.

The Panthers have their own threats on offense in the form of running backs Demarrell Leggett and Kenneth Dixon. Sophomore quarterback Sevante Quinn is coming into his own at Ole Brook as well.

However, the “X-factor” in this match will be Ole Brook nose guard Jeffery Johnson. The junior has been a disruptive force so far this season, with eight tackles and one sack through two games.

The key to success for the Panthers defense will be to apply pressure to Nunnery early and often. If Johnson is able to flush him out of the pocket and force him to use his legs and make tough throws, it could tilt the game in the Panthers’ favor.

Here are the “X-factors” in a few other games across the area.

In last week’s nail-biting loss to Sumrall, junior running back and defensive back Dell Thigpen caught a touchdown, rushed for a touchdown, threw a touchdown and caught an interception for the Cobras. A performance like that should illicit more touches and attention from the Bobcats’ defense, but speed kills, plain and simple. Thigpen should have a big game at Bogue Chitto.

With their starting quarterback sidelined and one of their best runners in Julian Anderson still nursing an injury, Primetime 23 receiver Chase Owen is the Bears’ only weapon on offense. He still has not had a big game this year, but it could come against a Sumrall secondary that the Cobras exploited last week.

If Loyd Star should emerge the victor at Sacred Heart, Hornets’ running back Zac Arnold needs to have a big game. The senior had 179 yards and two scores last week and his bruising style is perfect for clock-management should the game be close. But, even if the Crusaders stop him they still are tasked with stopping “PT 23” linebacker Parker Flowers. Good luck with that.

This game will feature two solid runners in Enterprise’s Tanner Waldrop and Mount Olive’s Latravious McNair. Waldrop has not had a big game as of yet this season, but this style of game suits him. Expect the YellowJackets’ 1,000-yard rusher to shine at home in what should be a very physical game tailor-made for fans of old school ground-and-pound football.

All of the area teams hit the road Thursday as slow-pitch softball season continues. It was a fruitful journey for... read more