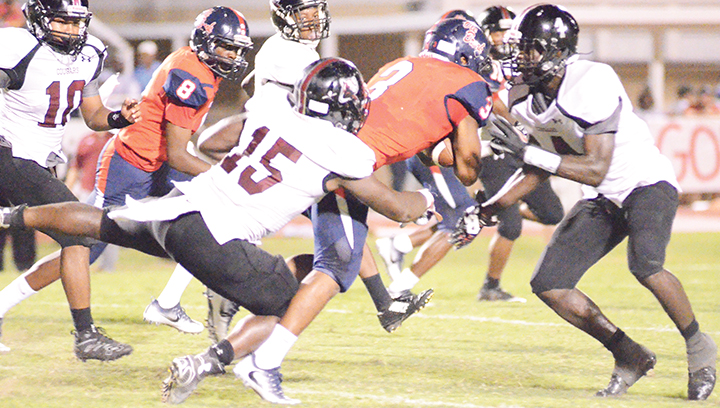 Photo by Anthony McDougle/
Ole Brook running back Kenneth Dixon is wrapped up by Lawrence County’s Marcus Atterberry during the two team’s game Friday night at King Field in Brookhaven.

Two teams that boast plenty of offensive firepower took to King Field in Brookhaven Friday night for The Daily Leader’s game of the week between Brookhaven (2-1) and Lawrence County (0-3).

Despite that fact, defense proved to be the deciding factor of the game. The Ole Brook Panthers’ “D” managed to corral Primetime 23 quarterback Charl’Tez Nunnery and company on their way to a 28-14 win over the Cougars.

Demarrell Leggett, a junior running back who may have the nastiest stiff arm in the area, contributed 75 yards and one touchdown to the ground game.

Quarterback Sevante Quinn rushed for 101 yards on 10 carries and though the numbers may not state his importance, all the yards the sophomore earned on the ground were crucial for his team in the win.

Quinn managed to weave his way to first downs or positive yardage on several occasions, keeping the momentum for his offense and managing the game in the process.

“He did a good job managing the game, not forcing things and making plays when he needed to make them,” head coach Tommy Clopton said.

Quinn may not have had the best stat line passing of the night (4-of-13, 76 yards, 1 TD), but Clopton said he felt the signal-caller showed maturity and resiliency by finding other ways to contribute for his offense.

“I think that’s a maturity thing,” he said. “We missed a couple things we had worked on, but learning to put it behind you and bounce back and make the next play shows leadership, and I’m proud of him for that.”

All four of Quinn’s completions went to Zarian Haper, who also reeled in a diving touchdown pass.The defense played well in the absence of linebacker Wesley Calcote, holding Nunnery to 25 yards on 16 carries after he eclipsed the 100-yard mark in each of the last two games.

Isaiah Wall and Jordan Blackwell led the way with nine tackles each. Deion Williams had eight stops on the night. Dedric Butler put pressure on the Cougars’ backfield all night and came up with two quarterback hurries, one sack and seven tackles. Jeffrey Johnson added seven as well.

Trent Smith and DJ Durr each had five tackles for Ole Brook.

The lone score of the first half came early on, when the Cougars marched down field and capped the drive with a score on the one-yard line by Josh Knight to go up 7-0.
Ole Brook would rule the second quarter though, as they put two scores on the board while not allowing the Cougars to reach paydirt.

The first score of the quarter came when a beautiful touch-pass from Quinn found a diving Harper in the endzone to tie the game at 7 all. The next came after the Panthers constructed another decent drive and finished it with a two-yard touchdown run by Williams to take a 14-7 lead heading into halftime.

Both defenses settled in during the third quarter and scoring was at a minimum. However, a busted coverage by Ole Brook allowed Nunnery to find Knight running a route out of the backfield. Twenty-eight yards later, he would make it into the endzone to tie the game at 14.

The fourth and final quarter was the determining factor in what was a close game the entire way through. Ole Brook scored twice in the quarter, on 14 and 25-yard runs by Dixon and Leggett, respectively, to put the game out of reach for Lawrence County.

The Cougars’ effort on offense was led by Nunnery. The senior went 8-of-18 for 118 yards and one touchdown through the air.
Knight had four catches for 35 yards and caught Nunnery’s only touchdown pass of the night. Wide receiver Kendarius Feazell caught one pass for 43 yards and Brandon

Bullock reeled in two catches for 21 yards. Bullock also added 26 yards rushing to his stat line to lead all Cougar rushers in the game. Knight contributed with 11 yards and one touchdown on 10 carries.

Cougars’ head coach Jaymie Palmer said he was happy with his team’s effort in the loss.

“I was proud of my kids. They played hard,” Palmer said. “They just wore us down at the line of scrimmage.”
Palmer said Johnson’s  disruptiveness in the middle caused his team to alter their gameplan slightly Friday.

“We are usually an inside zone type team, but we had to change it up because of the space-eater they have in the middle. He forced us to run everything off tackle,” Palmer said.

After last week’s mistake-ridden loss to Northwest Rankin, Ole Brook did a better job eliminating mistakes and did not surrender any turnovers and also had better play from its special teams unit.

“I thought our punt protection was a lot better and our snaps and kicks were good,” Clopton said.
He was most impressed with not only his quarterback’s resiliency, but his whole team’s.

“We gave up a fourth down touchdown on busted coverage and a few other plays, but our guys bounced back every time,” the head coach said.

The Panthers will hit the road after the big win to face the McComb Tigers this week. McComb is hoping to rebound after a 32-23 loss to Tylertown. The Lawrence County Cougars will head home to face Prentiss (2-1). The Bulldogs also suffered a loss Friday night, a 22-6 defeat at the hands of Heidelberg. Kickoff for both games is set for 7 p.m.