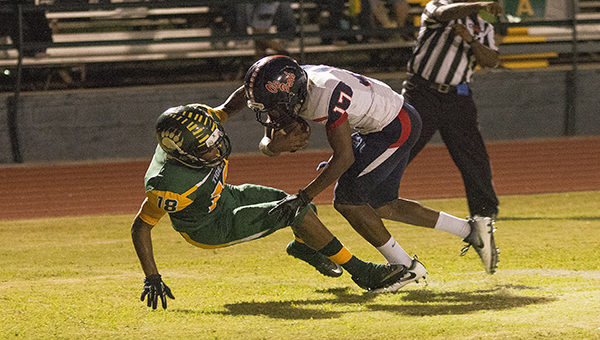 Photo by Rick Wells/
Ole Brook Sevante Quinn tries to get past a McComb defender in the Panthers’ 41-14 victory Friday.

The Brookhaven football team capitalized on mistakes at McComb Friday night while putting together four first-half scoring drives of its own to jump out to a 28-0 halftime lead en route to a 41-14 victory.

“We’re getting better at playing team football,” Brookhaven head coach Tommy Clopton said. “I thought last week in the second half we started putting it together. I thought we came out in this game and had opportunities early. We had a receiver wide open for a touchdown and we weren’t able to get it to him with a breakdown in protection.”

The Panthers (3-1) capped off a six-play drive to open the game with a 29-yard touchdown pass from quarterback Sevante Quinn to wide receiver John Hilbert to take a 7-0 lead with 9:50 remaining in the first quarter.

Brookhaven created two turnovers in the first quarter it did not capitalize on before extending its lead. The Panthers saw the endzone later on a one-yard run by Deion Williams to put the score at 14-0.

Direyun McNair of the Panthers recovered a high snap from Tigers’ center John Gardner at the McComb 23. Gardner started in place of Ulyses Brown, who was out with an ankle injury.

Emanuel Allen replaced Gardner after a second bad snap, but the exchange between the Tigers’ center and quarterback was a problem for much of the night.

“We didn’t come out to play tonight,” Tigers’ head coach Jeffery Gibson said. “We got outplayed, and that’s on me. I guess I’ll do a better job of getting us prepared, but he (Brown) was a big loss. We couldn’t get the ball snapped back there.”

Axavian Jones of Brookhaven intercepted a pass from McComb quarterback Venchenza McCray in Tiger territory with more than four minutes to play in the first quarter. However, the interception was called back on a pass interference.

The Panthers hit their stride in the second quarter as Kenneth Dixon, who had 11 rushes for 75 yards, ran in a 16-yard touchdown with 5:40 remaining in the first half to extend the lead to 21-0.

Demarrell Leggett, who had more than 50 yards rushing on the night, capped off a 13-play drive with a 3-yard touchdown run with three seconds remaining in the first half to extend the Panthers lead to 28-0.

“I thought in the second quarter we came back and asserted ourselves,” Clopton said. “Then I thought our guys came out of the dressing room at halftime and played really hard to put the game away.”

McCray, who finished the night 5-of-17 for 105 yards, did not complete any passes in the first half.

While the Tigers were expected to be at full strength earlier in the week, Gibson said after the game senior wingback Ali Henson was banged up and at around 50 percent. Henson had three receptions for 32 yards.

“They came and outplayed us tonight,” Gibson said. “We just have to go back to the drawing board.”
The Panthers extended their lead when Quinn found Zarian Harper for a 30-yard touchdown to make their lead 34-7.

The Panthers equaled their biggest lead at 41-7 with 1:33 remaining in the game on a Jaquarius Edwards 19-yard touchdown run.

The Panthers’ head coach praised his offense for the way it was able to spread the ball around.

“That’s the thing about our guys is we talk about a team,” Clopton said. “We don’t have that one superstar that everybody talks about, but we’ve got a bunch of guys that play extremely hard together. .”

After cutting Brookhaven’s lead to 34-7, McComb had opportunities to come back.
McCray, who finished with 92 rushing yards, ran for 31 yards on a keeper giving the Tigers first and goal at the

Brookhaven 3 with 9:34 remaining in the fourth quarter.

Brookhaven’s Jordan Blackwell recovered a fumble on a bad snap two plays later, giving the Panthers the ball at their own 20 with 8:22 to play.

No. 4 Co-Lin beats Coahoma despite errors

Photo by Amy Rhoads/Copiah-Lincoln linebacker Michael Graham returns an interception against Coahoma Thursday night. It did not go the... read more