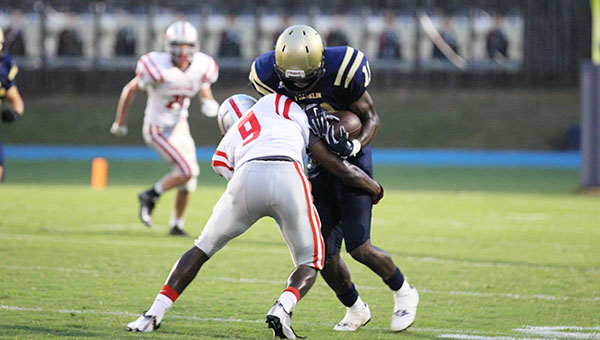 For a quarter, the class 2A Loyd Star Hornets gave Franklin County fits. But, the Bulldogs eventually flexed their 3A muscles on their way to a 38-6 win Friday.

Loyd Star (2-2) scored the first points of the game as Parker Flowers connected with James Beard for a 82-yard touchdown, then the FC defense answered with three interceptions, two fumble recoveries and two safeties.

“I feel like our effort was good at times, but we had problems with turnovers and penalties. We were outmanned as far as depth and personnel,” Loyd Star head coach Adam Cook said. “While we were fresh we played well, but our kids were gassed having to play kids on both sides of the ball.”

Cook praised the efforts of the Bulldogs’ defense in the loss.

“They are probably the best defense we will face all year,” he said. “Their front three guys in that scheme can play anywhere.”

FC senior De’Martre Collins took advantage of the “Stars & Stripes” night theme by showcasing his speed and elusiveness. Collins wore an arm sleeve to pay respect to the armed forces and law enforcement during the game.

“We played good as a team,” Collins said. “I had to breakout the USA arm sleeve for this game. It was our patriotic game.”

Collins was the star of the night, throwing three touchdowns and 197 yards on 11-of-22 passing. The cat-quick playmaker also kept drives alive with his feet as he rushed for 75 yards on five carries.

It was Collins’ second start at quarterback this season after the surprising transfer of starter Jacob McDaniel to Adams  County Christian School in Natchez.

“Playing quarterback is nothing new to me,” Collins said. “I played it my sophomore season and last year in the playoffs.”

With Collins flashing his cannon arm through the air and his blazing 4.31 forty-yard-dash speed on the ground, Loyd Star couldn’t contain the 5-foot-9, 165-pound standout.

Still, the game was highlighted by the Bulldogs’ defense, which held Loyd Star to minus-26 yards rushing and forced two safeties in the first half.

Franklin (2-2) carried a 17-6 lead into halftime, and added to it in the second half.
Paced by Collins’ touchdown throws, FC kicker Spencer Romero connected on 2-of-2 extra points.

Cameron Young had seven tackles and a sack, while Clay Wright and Dominique White had six hits.
Javian Moore added five tackles, forced a fumble and made a sack.

Flowers, the Loyd Star standout, threw for 119 yards on offense and had a game high 18 tackles (12 solo) on defense.
Beard finished with two catches for 95 yards and a touchdown.

Ray Richardson added nine tackles for the Hornets, Zach Baker made a sack.
The Hornets will face Scott Central at home this week at 7 p.m.

Photo by Rick Wells/Ole Brook Sevante Quinn tries to get past a McComb defender in the Panthers’ 41-14 victory Friday.... read more