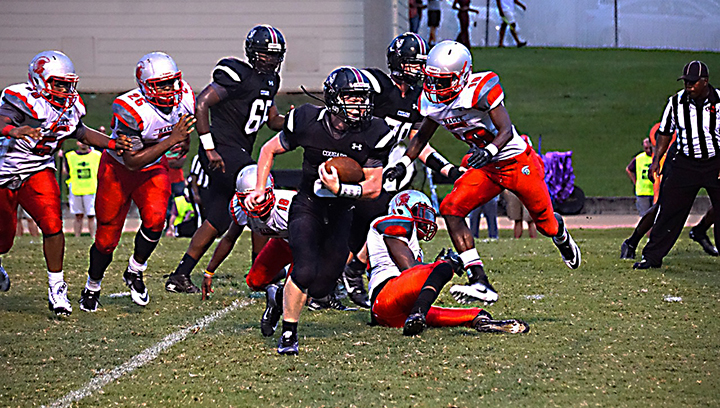 Photo by Jana Harp/
Lawrence County running back Brandon Bullock looks for room in the Cougars’ first game of the season against the Magee Trojans.

The Lawrence County Cougars had their homecoming spoiled Friday in a 21-19 loss to Prentiss.

“We were a couple of plays away from winning,” head coach Jaymie  Palmer said. “We need to learn to play hard and be more consistent and execute on the little stuff. We will find out the true character of our team next week.”

The Cougars are now 0-4 on the season after the loss, which is a surprising turn of events considering how well they played last year.

Lawrence County only lost one regular season game last year on their way to the South State Championship game.

The offense was led, yet again, by Primetime 23 quarterback Charl’Tez Nunnery. The senior completed 15-of-34 passes for 192 yards and two touchdowns, but also gave up an interception on the night. He also rushed for 19 yardsto lead all Lawrence County rushers.

Wide receiver A.J. McLaurin led the receiving corps with four catches for 88 yards and one score. Primetime 23 tight end Marcus Atterberry reeled in six receptions for 67 yards and one touchdown as well.

Azar Myles, the Cougars’ PT 23 linebacker, had 18 tackles and a sack on the night.

The Cougars scored first in the game when Nunnery found McLaurin from 27 yards out for the touchdown, but the

Bulldogs answered back with a 63-yard touchdown —compliments of Ronald Baker—to take a 7-6 lead.

After both teams went scoreless in the second quarter, Prentiss ripped off two touchowns, a one-yard run and another big reception by Baker to extend their lead.

The Cougars would score in the third and fourth quarters courtesy of Atterberry and Josh Knight, respectively, but the two missed field goals proved costly for them down the stretch.

Palmer’s squad will face a tough Franklin County squad this week as they try to get their first win.