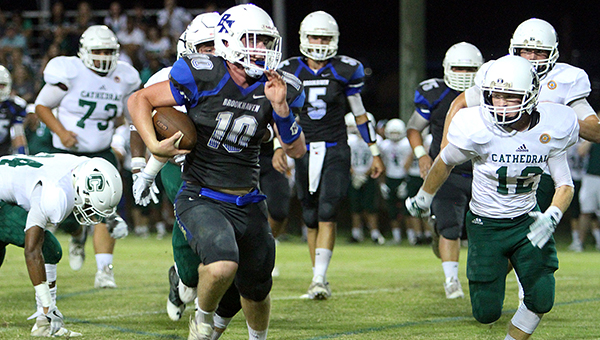 Brookhaven Academy senior quarterback Madison Smith rushed for 100 yards and one touchdown and threw for 136 yards and a touchdown Friday night in a 34-20 loss to Cathedral in Brookhaven.

Smith helped lead the young Cougars team by carrying the load, making big plays and keeping drives alive. His first touchdown pass came to sophomore Cade Brown on a one-yard completion that followed a long Smith run right through the middle of the Green Wave defense.

Sophomore quarterback Keegan Smith rushed for 11 yards per carry including a touchdown late in the fourth quarter. He also kicked two PATs through the uprights on the night.

The defense played with energy deflecting passes, forcing fumbles and continually stopping the Green Wave in the backfield.

Cathedral reeled off four touchdowns in the first quarter to jump out to a big lead early.

The first was a 41-yard pass from Connor Mire to Craig Bradley with 8:45 left in the first quarter. Three minutes later, William Doss stepped in front of a Smith pass and retruned it five yards for the score.

Less than a minute later, Derrion Batieste broke off a 35-yard touchdown run to bring the score to 21-0.

Smith broke up the Green Wave party with a one-yard touchdown pass to Brown for the Cougars’ first score of the game.

However, Cathedral was not quite finished and scored on a 23-yard run by  Bradley.
Their final touchdown came in the second quarter on a 40-yard pass from Mire to Will Wallace.

The Cougars scored two more times in the game on touchdown runs by Madison and Keegan Smith to close out the night’s scoring.

Smith led the way rushing and passing. He had 100 yards and two scores on the ground and 136 through the air to account for most of the Cougars’ yardage on  the night.

Brookhaven Academy’s next game will be against Adams County Christian at home. Kickoff is set for 7 p.m.

Photo by Tracy Fischer/Wesson’s Will Hulon is involved in numerous sports and activities in his community.   In a word,... read more