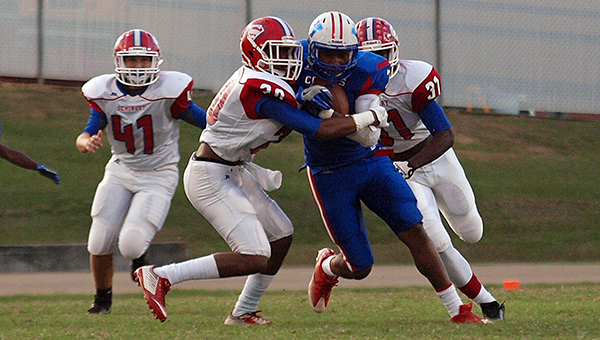 Photo by Tracy Fischer/
Wide receiver/safety Randy Hooker is tackled by Seminary defenders during their game Friday night in Wesson.

The Wesson Cobras fell to the Seminary Bulldogs Friday night by a final score of 46-34.

“The turnovers early hurt us,” Wesson head coach Jeremy Loy said. “To beat a team like that you have to win the turnover battle and stop their run.”

The Bulldogs owned the first quarter and quickly ran up the score with two touchdowns by Charles Barnes and Tyveron Morgan. Barnes completed a 29-yard pass in the end zone and Morgan rushed 30 yards to put more points on the scoreboard. Brazos Webb kicked the extra point to bring the score to 14-0.

The Cobras couldn’t get anything going in offense due to Seminary intercepting a pass and ending the quarter with a fumble recovery on the 35-yard line.

The battle heated up during the  second quarter, with Seminary taking the fumble recovery and moving the ball down the field with rushes by Morgan and Wendell Crosby.

Morgan sneaked into the end zone from the one-yard line for his second touchdown of the night. The Cobras struck back on their next possession, with significant rushes by Jermaine James and Trey Glasper. Wesson quarterback

Peyton Burns connected with Randy Hooker in the end zone for the Cobras’ first touchdown of the night. Fidel Mellado made the extra point to add seven points for Wesson.

The Bulldogs bit back hard, with rusher Crosby gaining yardage for three first downs and finally rushing to the end zone. The Cobras retaliated with James returning a kickoff and eating up at least 60 yards, taking the  ball to theBulldogs’ 21-yard line.

Dell Thigpen and Jerry Barlow moved the ball into the red zone and Glasper rushed in the touchdown on fourth down. The extra point was good by Mellado and the Cobras were up to 14 points.

The Cobras’ momentum continued with a fumble recovery on the next play, but they turned the ball back over to the Bulldogs with a pass interception by Seminary’s Zantarious Jenkins. Crosby ran in another touchdown for Seminary, ending the first half with a score of 34-14 with the Bulldogs in the lead.

The Bulldogs continued to dominate in the third quarter,  with Crosby scoring another touchdown. The Cobras couldn’t get their offense going and turned the ball over on  fourth down and Seminary scored yet again, with Felix McCullum rushing for the touchdown.

The Cobras punted on fourth down and Jim Guess recovered the kick, which put Wesson in the red zone on Seminary’s 16-yard line. Thigpen ran in the touchdown to bring the score up to 20 for the Cobras.

In the final quarter, Wesson’s JaQuavion Harris scored a touchdown after four first downs and Will Hulon completed a pass in the end zone for the two-point conversion.

On their next possession, the Cobras moved down the field with several rushes by Harris and with 1:11 on the clock, James rushed over 50 yards to the end zone. The Bulldogs held the Cobras for the rest of the quarter and ended the game with a final score of 46-34.

Burns finished with 232 yards, two touchdowns and two interceptions in the loss. Thigpen led all rushers with 39 yards. Hulon had five catches for 88 yards to lead all Cobra receivers.

The defense was led by Chamar Martin’s seven tackles. Damien Smith, Slay Acy and Glasper each had five tackles.
The Wesson Cobras will travel to Raymond High School to face the Pirates  Friday night.