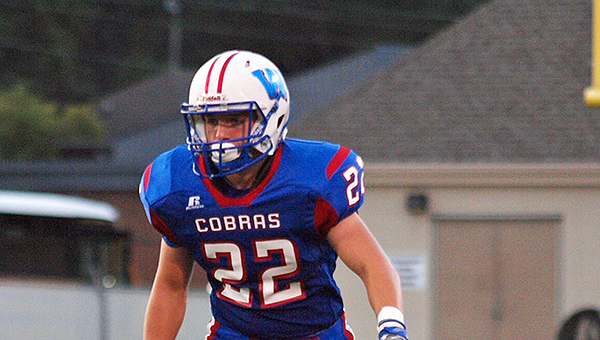 Photo by Tracy Fischer/
Wesson’s Will Hulon is involved in numerous sports and activities in his community.

In a word, Wesson wide receiver Will Hulon is busy.

He is the vice president of the senior class. He is currently taking a few college courses. He plays football, basketball, baseball, golf, runs cross country and manages to find the time to go fishing and hunting. He is one of the best receivers for the Cobras this year and was recently elected  Mr. Wesson.
One wonders how he finds the time, but a full plate is the way the senior prefers it.

“I need to be active doing something. I can’t just be still. If someone asks me to do something, I’m gone,” he said.

People close to Hulon would alos likely use the words hard-working to describe him.
That is evident in what he has done on the football field. He has already scored four touchdowns as one of the

Cobras’ most viable options at wideout. When seeing him play, one would assume Hulon is simply in his element. After all, success on the  gridiron is not guaranteed to every player who laces up a pair of cleats.

Surprisingly, football is not where most of Hulon’s time has been spent. The little time he has left after everything else has not always been put into the game. In fact, it was not until this year that the senior began to play varsity football for the Cobras, head coach Jeremy Loy said.

“He came out when I got here and he has really been a bright spot for us,” he said. “He is very coachable and ultra-competitive. He’ll even run scout team, it doesn’t matter.”

Hulon said he had not played football since the eighth grade.

“Back then, I didn’t have the hands that I have now and we were not really throwing the ball a lot,” he said. “So, when my ninth grade year came around I was just thinking, ‘Man, they aren’t going to throw the ball, and I can’t really catch. I can’t do this.”

That logic pushed Hulon to put his efforts into becoming a better basketball player and by his 10th grade year he was starting on the hardwood for the Cobras.

The senior still stayed closed to the game of football even in his absence. He was a regular at summer workouts and practices, running routes with the receivers and working out with the team.

Finally, at the beginning of his last year in high school, he decided to give it a try again. So far, he has found great success.

Still, there was the task of learning the plays and familiarizing himself with the game. However, his wit is something others have spoken highly of and he met the challenge head on.

Two weeks after first getting the playbook, the wide receiver said he had learned not only his assignments but everyone else’s as well.

“He is a very sharp kid,” Loy said. “He works hard and gives it everything he has every time. In the summer he will be at nearly every workout.”

That, like most of the things young Hulon does, can be attributed to his inspiring work ethic. A work ethic which, he said, he puts forth in an effort to make his father proud every day.

Hulon and his family suffered a major blow in his sixth grade year when his father died of a heart attack. Since then, his family has looked to him to assume a role of responsibility.

He began to do other things in the community to nurture that responsibility as well. In the summers, he has  worked at the school doing janitorial work, assisting teachers and waxing floors. Even with all that, he still finds the time to hang out with his 15-year-old brother and the rest of his family.
Away from the high school, he can be seen around Wesson doing yard work for whoever asks of his services.

“After my family and I went through that heartbreak I was the one looked to and my uncles push me to get things taken care of and do it the right way,” he said.

Will Hulon doesn’t have time for hobbies, even if he could find the time for them in his hectic schedule. He’s too busy being a student. A big brother. A devoted son.

He’s a friend, a good neighbor and a standout football player. But most of all, Hulon is a leader, and someone who would surely make his father proud every day.

Photo by Teresa Allred/Bogue Chitto running back Terrance Morgan is wrapped up by a West Lincoln defender in the Bobcats... read more