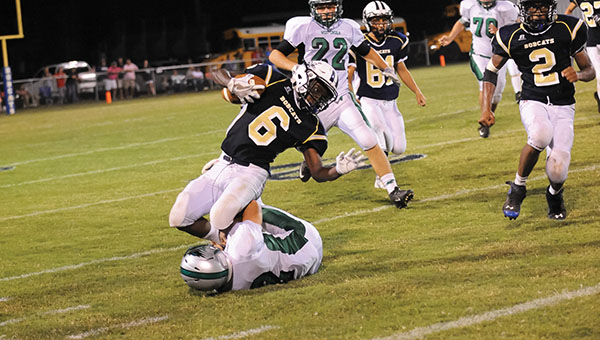 Photo by Teresa Allred/
Bogue Chitto running back Terrance Morgan is wrapped up by a West Lincoln defender in the Bobcats 40-6 loss to the Bears Friday night.

The West Lincoln Bears ended their nine-game losing streak Friday night at Troy Smith Field with a 40-6 victory over the Bogue Chitto Bobcats.

West Lincoln wasted no time scoring in the first quarter. With 11:20 on the clock, the Bears’ Nathanael Addison connected with Ledarrius Jones on a 10-yard pass, putting the Bears up 8-0.

Deciding to take a chance on the ensuing possession, the Bobcats elected to go for it on fourth and 10.  However, Addison was able to break up the pass.

Things seemed to take a turn for the worst for the Bears on offense, as snaps sailed over Addison’s head. Luckily for them, they  were able to overcome those mistakes and take a 8-0 lead into the second quarter.

The Bobcats weren’t immune to the same errors, as their first snap of the second quarter went over the head of quarterback Trey Nettles and was recovered by Demarcus Goldbolt, putting the Bobcats into a fourth and seven situation.

The Bobcats decided to go for it, but could not convert.  After another poor snap from the Bears forced them to punt the ball away, the Bobcats’ offense seemed to have found their rhythm, but another fumble recovery by the Bears would kill their momentum.

Determined to make up for the loss, the  Bobcats’ defense sent a heavy blitz after Addison but missed the sack. Addison was able to get the ball to Michael Brothern for a 25-yard score.

Later, with 4:23 left in the second half, Addison was able to connect with Chase Owen for a 20-yard receiving touchdown.

The Bears struck again with only 34 seconds left on the clock when  Julian Anderson rushed for a 12-yard touchdown. On the ensuing kickoff, another Bogue Chitto fumble gave West Lincoln possession. As time expired in the second quarter, the Bears went for it all but the Bobcats’ Henry Thomas got the interception and the Bears took a 20-0 lead into halftime.

The Bobcats managed to march down to the five-yard line on their next drive before a poor snap went over Nettles’ head. The Bobcats’ defense was able to force the Bears to fumble. Bogue Chitto recovered, but their offense would once again stall, thanks to an interception by Anderson.

As time ticked away late in the third quarter, Addison was able to throw a 10-yard touchdown strike. The Bears took a 28-0 lead into the fourth and final quarter.

The Bears’ Anderson would score once again on a 18-yard rush with 10:11 left in the fourth quarter. The Bobcats were able to score their only touchdown of the night on a fourth and short, on a 18-yard rush from Goldbolt. With 42 seconds left on the clock, Brothern registered the final score on a five-yard rush.

“We played hard. There’s still some things we need to work on. I’m proud of the guys’ effort. If we continue to improve, we’ll leave ourselves chances to win games,” Bears’ head coach Charlie Jackson said.

Photo by Teresa Allred/Enterprise quarterback Zach Hodges rushed for 116 yards on 10 carries in a 27-14 loss to the... read more