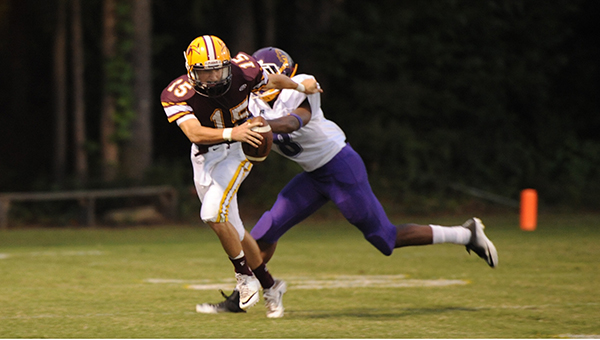 Photo by Teresa Allred/
Enterprise quarterback Zach Hodges rushed for 116 yards on 10 carries in a 27-14 loss to the Clarkdale Bulldogs on the road Friday night.

The Enterprise Yellow Jackets made a long road trip to visit Clarkdale Friday night in non-district 2A action hoping for a win after suffering a hard loss to Mt. Olive.

However, penalties and turnovers kept them from securing the victory as they fell to the Bulldogs 27-14.
Both teams came out strong, creating a defensive battle in the  first quarter. Hunter Vick ran in a touchdown for the

Bulldogs with 1:13 left in the first quarter, putting the first score on the board in the game. Chase Stephens kicked in the point after to make the score 7-0 early on.

Enterprise’s Tanner Waldrop then made an awesome run downfield on a kickoff return to the end zone. However, the touchdown was negated by a holding penalty.

Not long into the second half, the Bulldogs scored another touchdown by Landon Gibson. But, the Jackets were determined for a comeback. Waldrop ran for 48 yards into the end zone with 4:28 left in the  third quarter to put

Enterprise on the scoreboard. Enterprise followed with another touchdown by Zach Hodges on a 31-yard run that was negated by a blocking in the back penalty. Enterprise continued to hold defensively throughout the remainder of the game.

Hodges scored again on an incredible 67-yard kickoff return followed by a pass to Toby White to get the two point conversion. However, it wasn’t enough to secure a win and Enterprise fell to Clarkdale by a final score of  27-14.

After the game,  Enterprise’s Coach Brooks Burns said he was proud of his guys’ effort on the field.

“They played their hearts out for four quarters,” he said. “The difference was turnovers. They fought hard and I will take that every day of the week.”

Leading Enterprise defensively was  Devon Kirtfield with a total of 17 tackles followed close behind by  Austin Boyte with 14 tackles and Gabe Haggard with 10 tackles. Offensively, Enterprise tallied a total of 252 yards rushing with

Hodges in the lead with 116 yards on 10 carries. Following close behind on offense was  Waldrop, carrying the ball for a total of 103 yards on six carries. Tristan Cantrell helped out by recovering a fumble in the game.

Enterprise will be at hosting the McLaurin Tigers in non-district play this week for their homecoming.

Photo by Tracy Fischer/Wide receiver/safety Randy Hooker is tackled by Seminary defenders during their game Friday night in Wesson. The... read more