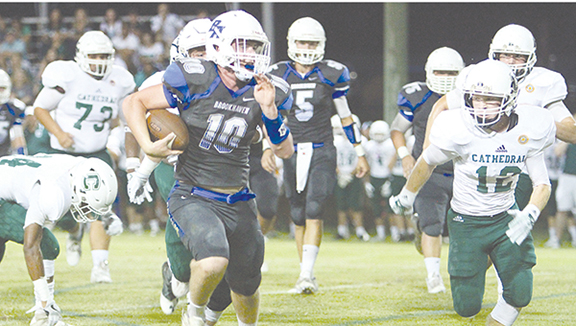 File photo/Madison Smith and the Brookhaven Academy Cougars hope for their first win of the season at home tonight against Adams County Christian.

It seems like only yesterday that I was starting as the sports editor in this town fondly referred to as the home seeker’s paradise.

As the summer days passed, I settled into my new position and my new home. All the while, I yearned for the beginning of the high school football season. Hard to believe that was almost three months ago.

I now find myself fully immersed in what has been an exciting season so far. It is only week five and  much football remains to be played, but even now, the contenders are starting to separate themselves from the pretenders.

The Panthers of Ole Brook have gotten off to a 3-1 start after losing their first six last season and proved they are not the same team from a season ago. Hazlehurst is exceptional, and as expected, Franklin County looks good as well. Furthermore, I remain confident that my two sleeper teams, Wesson and Loyd Star, will surprise some people this year.

But, before I can receive the praise for accurately predicting success for these and other area prep teams, first things first. There is still over a month of games to be played and week five looks to be a good one.

Many teams in the area will be taking on top-notch competition tonight but my game of the week would have to be Franklin County vs. Lawrence County. The Bulldogs were the winners of last week’s game of the week over the Loyd Star Hornets in a 38-6 victory. The story of the game was the play of the Franklin County defensive front and I bet my bottom dollar that the matchup pitting them against the Cougars’ offensive front will determine the game.

The Cougars’ offensive line has struggled early on, but what better way for them to bounce back than with a victory against the Bulldogs.

As for the Hornets, they also face a tough opponent in the form of the Scott Central Rebels (2-2). The Rebels beat Loyd Star 33-18 last year but this year’s version of the Hornets should pose a bigger threat. Naturally, Primetime 23 players James Beard and Parker Flowers must have a big game. However, the Hornets’ success against the Rebels may hinge on the performance of both the offensive and defensive fronts. Coach Adam Cook said he felt his team was beat in the trenches on both sides of the ball, so they should go into this game looking to right the ship.

Elsewhere, the Bogue Chitto Bobcats are one of two teams, the other being Brookhaven Academy, that is still looking for its first win of the year.

They will find the going tough against Stringer (2-2).

The Red Devils will likely implement their ground game to impose their will, with the effort led by senior Anthony Thomas. Bogue Chitto gave up 40 points to the West Lincoln team that had been struggling up to that point, so the pressure will be on the entire defensive unit tonight.

Head coach Gareth Sartin and the Bobcats will have to contain Thomas and get stellar play from the defensive line all the way to the secondary to get a win on the road. They may find a way to do the former of the two, but I would be shocked if they could do the latter.

Speaking of the Brookhaven Academy Cougars, they face Adams County Christian on their home turf tonight. Head coach Ron Rushing said Adams County could be the best team in their district, so the Rebels will be fierce opponents for a team on a 17-game losing streak.

Quarterback Madison Smith put on a show in a 34-20 loss to the Cathedral Green Wave, a team that also is a contender for the district title. The Cougars will play even better than they did against the Green Wave, but after Friday they will have lost consecutive games to teams from Natchez.