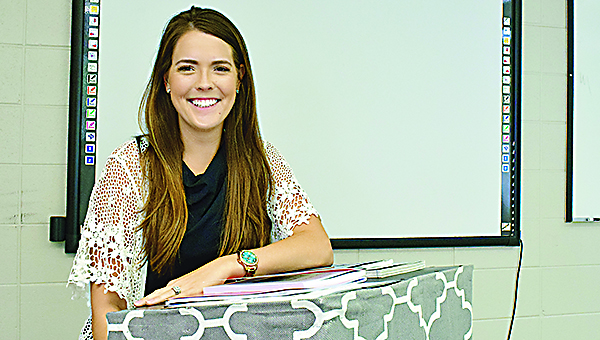 Although many popular sayings may suggest that teachers choose their occupation as a last resort, two new teachers are quick to say there was one important driving passion — a desire to work with children.

Ashley Grubbs, a first-year math teacher at Lipsey School, said education was not her original plan. After graduating from Wesson Attendance Center in 2012, she began her post-secondary journey at Mississippi State University studying biological sciences.

Her participation in Day One Leadership is ultimately what pointed her in the direction of teaching. 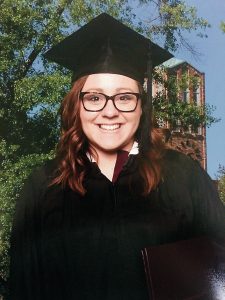 “Through Day One Leadership, I ended up volunteering at Palmer Home for Children where I assisted with an equestrian therapeutic riding program,” she said.

After spending several afternoons working with her Day One partners as they assisted students with disabilities in therapeutic riding, Grubbs knew that she could not stay a biological sciences major.

“I wanted to do something more. I wanted to get the feeling I got working with those students every single day,” she said. “I changed my major to undecided — not being sure exactly what I should study to get that ‘feeling.’”

Grubbs chose to enroll in a career planning course and spent a semester learning about herself and careers she could be successful in. After weeks of soul-searching and self-study, she discovered her match — education.

“I just decided to go ahead and give it a shot thinking I could always fall back into my other studies if I did not like it,” she said, “I obviously didn’t like it — I loved it.”

All it took was one education course for her to be certain she was in the right place.

“I just knew and could feel that I had made the right decision,” Grubbs said.

Once she settled on education, it didn’t take her long to realize that math would be her discipline of choice. During the mandatory course on the foundations of mathematics, she learned that there was more to math than just the procedure.

“I studied how to assist students in learning from previous understandings and building knew knowledge. This way students understand how and why the problem works before they learn the procedures and how to apply the math underneath,” she said. “The passion that drives me in mathematics is the understanding of how and why problems work and the proof that follows those questions. There’s not really an ‘if,’ and there’s always a solution.”

And while for many the introduction of the alphabet into math sends shudders of fear, Grubbs thrives in Algebra.

“I just love being able to solve problems through manipulation of symbols, expressions and rules,” she said. “Knowing Algebra is like knowing another language and all the rules that come along with it. If you know it and how to apply it, then you can speak it and solve it.”

Sometimes math can be a struggle for students, but when they grasp an understanding — that is the true reward of teaching.

“The students get so excited when they finally understand, and I get excited for them,” she said. “Many students will tell you they either love math or they hate it. I truly think it is the experiences they have had in math that determines this love or hate relationship.”

Inspiring students, whether in their subject or just in life seems to be the driving force behind those who find their passion in education. For Elizabeth Ellis, the new seventh through ninth grade English teacher at Brookhaven Academy, it is the ability to create relationships that drives her.

Technically this will not be Ellis’ first year. However, since her first year was teaching third grade a public school in Brandon, she’s getting to learn a whole new set of rules.

“I’m excited about giving them a little more freedom. I’m able to not baby them as much,” she said. “They’re kind of still testing the waters, but by this age they should know how to handle themselves in the classroom. They may not all the time, but they should be some sort of foundation for what’s right and wrong.”

With her new job in private education, Ellis is discovering that there can be a lot more freedom.

“It means I can be very creative. There’s not something that I have to 100 percent do that may not even connect with these kids,” she said.

In public schools there are certain things that were non-negotiable that she had to teach, and she had to teach them a certain way. She said it was comforting as a first-year teacher. This year, she will be relying on the expertise of other teachers at the school as she makes the transition, but she is looking forward to the opportunity to spread her wings and create her own teaching style.

Like Grubbs, she did not immediately know she wanted to study education when she started at Ole Miss.

“I knew I wanted to work with kids; that’s what I was sure about,” she said.

She spoke to a counselor at the school, and with the exception of nursing or pediatrics, teaching was the closest you can get to working with kids.

Although Ellis is originally from Texas, upon graduation she decided to stay in Mississippi because of her soon-to-be husband and Brookhaven native Clint Stewart.

“He actually went here,” she said. “He was in here [Ellis’ new classroom] for seventh, eighth and ninth grade with the teacher I replaced. I think pretty much everyone on this hall and in this building had him when he was younger.”

However, it wasn’t really her connection to BA that brought her here. Ultimately, it was new Head of School Jason Case who played the defining role in her decision.

“I had heard amazing things about him,” she said.

Before she took the job in Jackson, she interviewed with him while he was at West Lincoln Attendance Center, but there were no openings available. She interviewed with him again in the spring, and once again there were no openings at West Lincoln. Meanwhile, she met with the principal at BA and was offered her current position.

“I was really torn because I had an option to do third grade again or junior high,” she said. “I definitely had to pray about it and think about it. It took me a week or two to get back with the principal at the time, and then I found out Jason Case was actually retiring and coming here, so I chose here.”

Though many lessons learned her first year may not apply. One important one will.

“We all go to college, and we’re excited about teaching. But there are so many things that don’t get thrown at us until you’re in a classroom it’s a learning curve,” she said. “You’re prepared in some sense, but there are just some things you learn about yourself and things college doesn’t totally prepare you for.”

And while this year may have a few bumps in the road for these two teachers, their dedication to their students will help them ensure a successful journey  for them and their students.

The Mississippi Department of Environmental Quality  issued a water contact advisory Friday for a segment of the Bogue Chitto River beginning... read more