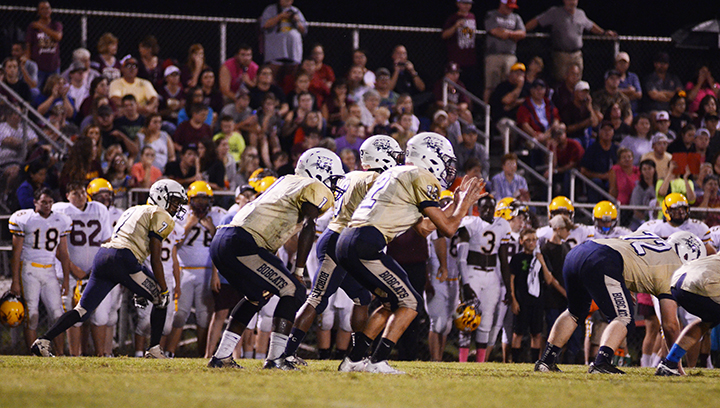 Photo by Anthony McDougle/
After starting quarterback Trey Nettles (No. 12, above) was sidelined with an injury, freshman Shaw King stepped in and threw a 70-yard strike in the Bobcats’ 47-14 road loss to the Stringer Red Devils Friday.

The Stringer Red Devils defeated the Bogue Chitto Bobcats 47-14 Friday night in a divisional game.
The Bobcats  took to Hwy. 84 toward Laurel Friday hoping to get their first win in district play, but Stringer had other plans.

It was evident from the game’s first snap that the Red Devils would come out on top.
The Bobcats tried to  establish a passing game against Stringer’s defense, but the Red Devils were able to take advantage and force four interceptions. They also recovered a Bogue Chitto fumble.

Stringers’ special teams unit  was even able to come  up with a score  when Taylor McCormick picked up the football after the Bobcats’ defense blocked the field goal.
As an offensive lineman, the score was likely a dream come true for McCormick.

The Bobcats had a shining star in the darkness of defeat when they brought in freshman Shaw King to direct the offensive attack after Trey Nettles was sidelined due to an injury.
The freshman threw several deep balls and connected with  receiver Zach Upkins for a 70-yard touchdown strike.

“We did not play well to start off, but my young players played well towards the end of the game,” Bogue Chitto head coach Gareth Sartin said.

In the first quarter of the game, the Red Devils got on the board first. Reece Barber found the endzone on a 10-yard run to make the score 7-0 in his team’s favor.

During the Bobcats’ ensuing drive, Stringer stepped up and got an interception to give their offense another chance to score.
Bogue Chitto came up big and got a stop to force the Red Devils to punt the football back to them.

Fortunately for  Stringer, their punter was able to boot one deep to force the Bobcats to go the length of the field to score.
To start the drive, Nettles connected on a few passes to move the Bobcats close to the 50. Cole Stringer stepped in front of Nettles’ next pass and returned it for a touchdown to give the Red Devils a 14-0.

Stringer quarterback Anthony Thomas found the endzone soon after on a four-yard run and his team went ahead 21-0 after drilling the extra point attempt.
Thomas would find the endzone again in the quarter, courtesy of a 54-yard touchdown run. After the extra point, Stringer went up 28-0.
Stringer’s defense would tally yet  another interception to end the quarter. The pick gave their offensive good field position to start the second quarter.

The Red Devils could not reach the endzone this time though, and elected to try a field goal.
The defense for the Bobcats came up big and blocked the kick but McCormick picked it up and ran in the score from 11 yards out.

The Stringer defense forced a fumble their next time out and capitalized on  offense with a 29-yard touchdown run from Zy Arrington to make the Red Devils’ advantage 40-0.

In the second quarter, Nettles came out of the game with an injury and King came in to finish. He started out rocky, but he finished well.
King threw only one  interception on the night, but it gave the Stringer offense great field position. Arrington of the Red Devils found the endzone to end the quarter on a six yard run and put his team ahead 47-0 .

In the second half, it was all Bobcats. King came out of the locker room with his cannon locked and loaded, and connected with several receivers to march the football downfield.

La’Fredrick Dillon capped the drive off when he found the endzone on a five-yard run. After failing to convert the two-point attempt, the Bobcats trailed 47-6.

In the fourth quarter,  Upkins had the aforementioned 70-yard touchdown reception to put the final score of 47-14 on the board.
Bryce Langley converted  the two-point conversion with a three-yard reception. Defensively for the Bobcats, Darius Porter led the team with eight tackles.

It was a tough loss for the Bobcats, but Bogue Chitto fans were able to witness young players stepping into key positions and get the opportunity to show their stuff.

The Bobcats will be at home against the Salem Wildcats for homecoming. The Stringer Red Devils  will host the Loyd Star Hornets in district action. Both games will be Friday at 7 p.m.