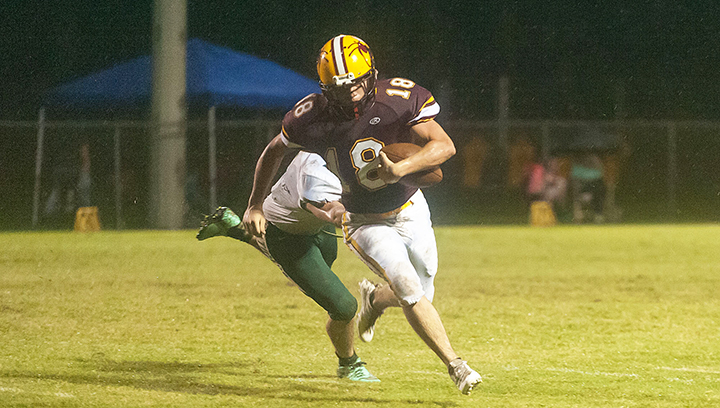 Photo by Teresa Allred/
Enterprise’s Brady Williams tries to shake off a McLaurin defender in the Yellow Jackets’ homecoming game against the Tigers Friday night.

The Enterprise Yellow Jackets came out victorious Friday night on Harry Cole Field in the homecoming game against the McLaurin Tigers in a 45-6 blowout win.

The Jackets had not won a homecoming game in many years, but they were determined to end their homecoming dry spell, and they succeeded.
The Jackets came out strong offensively early on, scoring on their first drive with 10:21 left in the first quarter.

Tanner Waldrop broke loose for a 54-yard touchdown run to put the first score on the board. Toby White’s extra point try was blocked by the Tigers to give the Yellow Jackets a 6-0 lead.

Within minutes, they were back in the end zone again with a one-yard score by Zach Hodges. White followed up with the point after to make the score 13-0 in the first quarter.

In desperation, the Tigers went to  their passing game without much success. McLaurin quarterback Chrishard Chase completed a couple of short passes to Johnathan Cooper and Jayvias Horton for short gains.

However, they were forced to turn the ball back over to the Jackets after a loss of downs.
With only 10 seconds left in the half, Hodges completed a beautiful pass to Waldrop, who took it in the end zone for a 61-yard touchdown, making the score 19-0 going into the half.

Cody Leggett followed, returning two interceptions for 59 yards. Gabe Haggard also picked off a short pass  and took it into the end zone. Also making interceptions for the Jackets were Hodges, Brant White and Darren Richardson.

Late in the third quarter, the Tigers’ Tristen Boyd broke loose and made it to the endzone, putting them on the scoreboard 37-6. However,  the Jackets came back with a 75-yard interception return from Waldrop, putting the final score of 45-6 on the board with a little over five minutes remaining.

Leading the Jackets in rushing yardage was Waldrop, carrying for a total of 82 yards offensively.
The Jackets had a total of 192 yards rushing. Zach Hodges completed 73 yards passing with Waldrop  on the receiving end. On defense, Tailor Young came out with a total of 10 tackles. Brant White followed with seven  tackles in the game, trailed by Tristan Cantrell who had six tackles.

There were a total of three sacks on the Tigers’ quarterback by the Jackets on the night.
McLaurin’s head coach Johnny Mills said that Enterprise played well. “We came out half-cocked,” he said, “and they came after us.”
Enterprise coach Brooks Burns for said he was proud of the preparation all week long.

“It was obvious who was the most aggressive team on the field tonight. We had a good plan for what they were trying to do, and our guys executed it well,” Burns said.

The Jackets will have a week off before traveling to play Prentiss in their first district game of the season.

Photo by Teresa Allred /Sara Jane Doty slides safely into second base during the Bears’ game against the Brookhaven Panthers... read more