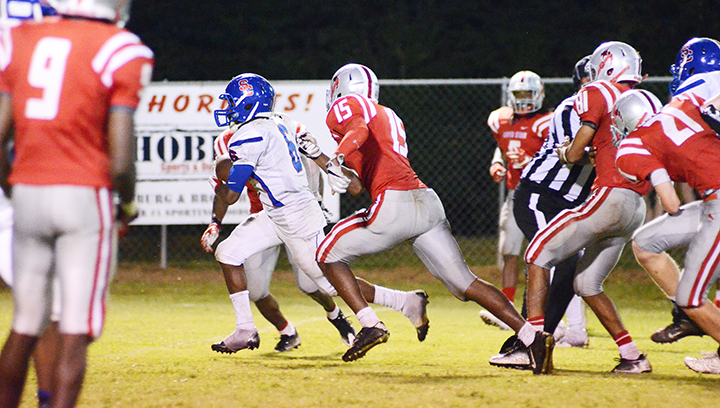 In what could be classified as a thrilling game, the Loyd Star Hornets hosted Scott Central for homecoming Friday night. The Rebels were able to get a clutch interception late and outlast the Hornets (2-3), picking up their third win of the season in a 21-16 victory on the road.

Although there wasn’t much action in the first quarter as it ended scoreless, the game picked up in the second quarter.
The Rebels found themselves in a fourth and short and elected to go for the first down, but the Hornets’ defense stood strong and denied the Rebels the first down.

The Scott Central defense returned the favor when Loyd Star found itself in a similar situation on a fourth and one.
With 7:56 on the clock, the Rebels’ T.J. Wash was able to find the endzone on a six-yard scramble. The Rebels lined up to go for the extra point, however, a mishandled snap forced them to go for the two-point conversion. They converted the attempt, but had it nullified because of a penalty to put the score at 6-0.

Later in the second quarter, the Hornets were forced to punt out of their own end zone on a fourth and seven. Despite pressure, Parker Flowers was able to boot a 36-yard punt. The Hornets’ Jared Smith was able to get to Wash in the backfield to end the half and keep the score at 6-0.

In the third quarter, with 11:39 on the clock, Patrick Price broke a couple of tackles and raced into the endzone for a 56-yard touchdown. The Hornets converted the two-point attempt to take an 8-6 lead.
The Rebels would once again find themselves in a fourth and short situation. They decided to go for it yet again and Loyd Star’s defense stood firm and prevented the first down.

The Hornets would see their next drive stalled because of penalties and an unfortunate turnover. Facing a third down, Michael Harvey had his pass picked off by the Rebels’ Lajavis Patrick.
Loyd Star was able to regain possession by forcing a fumble, however their turnover woes continued as they surrendered the ball to Scott Central with another fumble.

The Hornets made a goal-line stand to get the ball back once again after snuffing out a quarterback sneak attempt. Yet again, the Rebels would force a fumble and recover it. This time, Scott Central made the most of the Hornets’  error.

The Hornets went for the first down on a fourth and seven and seemed to have been stopped. Luckily, they were finally able to catch a break when a penalty by the visiting team gave them a new set of downs.

They took advantage of the opportunity. With 3:45 left on the clock, Harvey was able to connect with James Beard for an 18-yard score. Loyd Star converted the two-point try to put the score at 21-16.
The game seemed all but over with under two minutes left, but the Rebels gave the home team one more chance to win the game with a fumbled handoff.

The Hornets were on the move as time expired, but a pass from Harvey was intercepted by the Rebels, ending the Hornets’ chances of a comeback.

“Loyd Star is a good team. I’m very proud of the kids and proud of the win. We kept fighting and were able to get turnovers when we needed them,” Scott Central coach Jimbo Nowell said.

“We got to be better with our passing and not force throws. Turnovers killed us. Ball security has to show up,” Loyd Star coach Adam Cook said.
Loyd Star (2-3, 0-0) will be in action Friday night as they head to Stringer to take on the Red Devils. Kickoff is scheduled for 7 p.m.