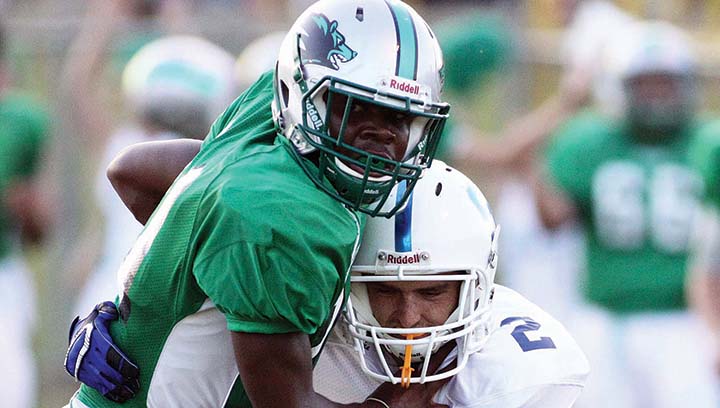 File photo/
Michael Brothern and the West Lincoln offense were forced to try and climb out of an early 35-point hole against Pass Christian Friday.

West Lincoln was no match for homecoming-ready Pass Christian.
The Pirates took charge early, scoring 35 points in the first quarter en-route to a 57-12 thrashing of the Bears.

V.J. Swanier scored the first two Pirates touchdowns and carried for both two-point conversions.
Montrell Alexander extended the Pirates’ lead to 22-0 on an interception return four minutes into the game.

“We did a good job of not turning the ball over tonight,” said Pirates coach Casey Wittman. “Turnovers have hurt us in our earlier games. Although we won some of those game. We’ve got to continue to protect the ball.

“Our kids came out excited and ready to play their homecoming game. They were up for this game. I’m proud of how we continue to improve.”

Tionne Frost rushed for 79 yards on five carries and a touchdown. His brother, lineman Travon Frost, also scored on a 2-yard TD run.
After the blowout loss, West Lincoln head coach Charlie Jackson said he emphasized playing up to the talent level of the competition to his team.

“I told them at the end of the day, we have to play hard no matter who we are playing,” he said. “As they grow as men they have to learn to step up to the challenge no matter what the situation.”
Jackson added that his top priority was ensuring the health of his players with the district slate just around the corner.

“One of my biggest concerns was getting out of this game healthy and we did that. I think we got out of it pretty healthy. We are going to let some of our bumps and bruises heal during our off week so we can have everyone back for district play,” Jackson said.

The Bears will have a bye week this week and begin district play Friday with a home matchup against Bassfield at 7 p.m.