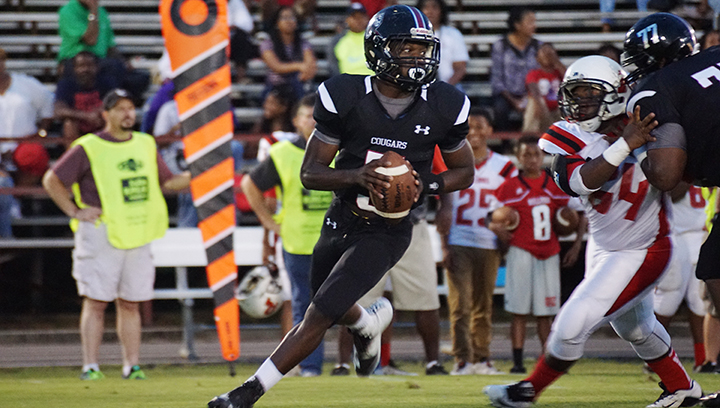 The Lawrence County Cougars roared from behind late, scoring the last 20 points of the game to defeat Franklin County 34-28 Friday night.
Jaymie Palmer’s Cougars battled back furiously after being down by as much as two scores to get their first win of the 2016 campaign.

With the win, Palmer’s Cougars improved to 1-4, after going 13-2 last season.
Franklin County, coached by Trey Woodard, fell to 2-3.

“I’m proud our guys got to enjoy a win,” Palmer said. “We needed that. In spite of the losses, our players have continued to work hard. There’s been no quit in this team.”

The Cougars got career nights out of seniors A.J. McLaurin and Primetime 23 quarterback Charl’Tez Nunnery.
Nunnery rushed for 231 yards and three touchdowns, and passed for 101 yards and two more scores.

McLaurin, a wide receiver and defensive back, intercepted three   Franklin County passes and hauled in passes from Nunnery for the final two touchdowns of the night.

“We got big nights out of two seniors,” Palmer said. “They put us on their backs and got it done.”

Twice in the first quarter, Franklin County got into Lawrence County territory. However, the first Bulldog threat ended with McLaurin’s first pick of the night. Moments later, with the Bulldogs enjoying a first-and-10 situation at the LCHS 14 yard line, a botched handoff was recovered by Cougar defensive end Drew Nelson.

The play after Nelson’s recovery saw Nunnery rip off a 58-yard run. That  run set up his 25-yard scoring jaunt on the very next play to give the Cougars a 7-0 lead.

It remained 7-0 until midway through the second quarter, as  both defenses dominated.
With 5:33 left in the half, Lawrence County had a major offensive  error of its own, and it led to Franklin County’s first score.

With the ball on their own 32, a mishandled option pitch cost the Cougars 24 yards and the football.

After seemingly half the players on the field bobbled, kicked or slapped the loose football, Franklin County’s Dominique White recovered it at the LCHS  8 yard line.

Three plays after White’s recovery, Bulldog quarterback De’Martre Collins flipped a two-yard shovel pass to him for the tying score.
Later in the half, with Lawrence County threatening, Franklin County’s Jaquan Brown scooped up a Brandon Bullock fumble and returned it 46 yards to the LCHS 44-yard line.

A 42-yard pass from Collins to Isaiah Elam set up Collins’ one-yard touchdown plunge, but a botched exchange on the extra-point attempt left the Bulldogs with a 13-7 halftime lead.

Franklin County opened the second half with a big kickoff return that set up Collins’ three-yard touchdown run six plays later. Romero’s kick made it a 20-7 game.

Franklin County drove deep into Cougar territory on the ensuing possession, but McLaurin’s third pick of the night kept Lawrence County close.
Franklin County was able to stretch its lead to 28-14 with 10:02 left in the game as Keonte’ Bee burst through the middle of the Cougar defense for 43 yards and a touchdown.

Collins passed to Xavier Green for a two-point conversion.

Down by  two touchdowns in the fourth quarter and staring at an 0-5 start to its season, Lawrence County’s comeback hopes got a boost when Jadarius Grandberry returned the ensuing kickoff 75 yards, to the Bulldogs’ 10. Two plays later, Nunnery scored on a nine-yard run, cutting Franklin County’s lead to 28-20 after the extra point was missed.

Franklin County fumbled the football away on its next offensive play and LCHS linebacker Azar Myles recovered at the Bulldog 35.
That set up McLaurin’s nine-yard touchdown grab five plays later. Needing a two-point conversion to tie the game, the Cougars were denied by Franklin County’s Bee and the Bulldogs maintained a 28-26 with 5:52 left on the clock.

After Lawrence County’s defense forced a quick three-and-out, the heroics of Nunnery and McLaurin completed the LCHS comeback. With 1:02 left in the game, Nunnery threw a quick screen to McLaurin, who dodged a Bulldog tackler and raced 25 yards for the winning touchdown.

Collins rushed for 98 yards and passed for 100 yards to lead Franklin County. Keonte’ Bee gained 83 yards on 11 carries. Bee and Elam each had three pass receptions.

Lawrence County will take to the road this week, traveling to Seminary for a Friday night contest. Franklin County will host Tylertown on Thursday. Both games will kick off at 7 p.m.

Photo by Anthony McDougle/ After starting quarterback Trey Nettles (No. 12, above) was sidelined with an injury, freshman Shaw King... read more