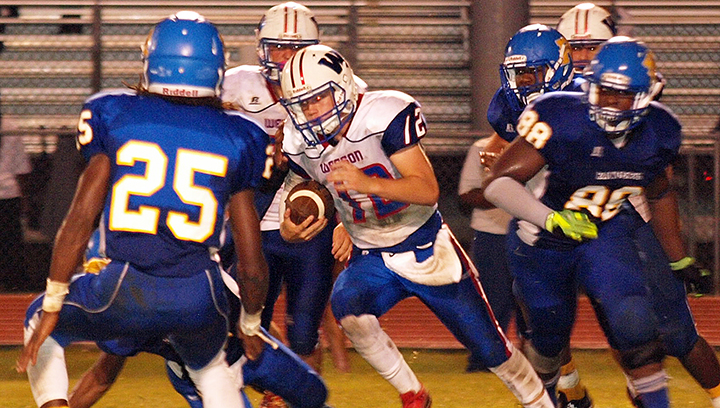 The Wesson Cobras controlled the first half of the game against the Raymond Rangers Friday night.
After allowing Raymond to tie the game and force overtime, the Cobras pulled out a 33-32 road win thanks to a made extra point by senior Matthew Craft.

“I am proud of my team,” head coach Jeremy Loy said. “They played with great effort and found a way to win. We are still progressing and have to learn how to finish when we are up.”

Although his team had a few critical errors down the stretch, Loy said he was glad they held strong and found a way to win.

“We had two costly turnovers and big penalties that kept us from putting the game away when we had a chance. Still, we found a way to win and that is a huge step forward for us,” the first-year head coach said.

The Cobras started the night receiving and moved the ball down the field with six first downs.

After a penalty for holding against the Cobras, the offense was unable to gain enough yardage and turned the ball over on downs to the Rangers.
The Rangers got moved back on penalties as well. Then, Wesson’s Slay Acy intercepted a pass to put Wesson back in control and in scoring range on the Rangers’ 27 yard line.

After a couple of incomplete passes, Will Hulon caught the ball on fourth down and scored the first touchdown of the night for the Cobras to put them ahead 7-0.

The Rangers’ Derrick Turner responded on the ensuing kickoff. Turner got the ball and raced downfield for  a 98-yard touchdown.  The Rangers missed the extra point to make the score 7-6 in Wesson’s favor. The Cobras took over with Dell Thigpen receiving the kick off and returning it to the Ranger 49 yard line.

Tre Glasper eventually capped off the drive and crossed the goal line for the touchdown to give his team a 14-6 advantage to end the first quarter.
Wesson started the second quarter in the Rangers’ red zone, but fumbled the ball. Raymond failed to capitalize on the error and turned the ball over on downs on their next drive.

Glasper would take a carry 69 yards  for his second touchdown of the night soon after. The extra point fell short to give Wesson a  20-6 lead.
The Rangers took over on their 49 and moved to the Cobras’ 38, but a bad snap pushed them back and forced them to punt on fourth down. Thigpen returned the punt to Wesson’s 47 yard line.

On the next play, Hulon caught a pass for his second touchdown of the night. Wesson went for the two-point conversion but fell short of the end zone to put the score at 26-6.

On Wesson’s next possession, the Cobras punted on fourth down, but a bad snap was recovered by Raymond inside the Cobras’ 10 yard line.
Ranger Derrick Turner ran the ball into the end zone for his second touchdown and the first half ended with a score of 26-12, with the Cobras ahead.

The Cobras lost their steam in the second half and let the Rangers close the gap.
Raymond started the third quarter receiving, but couldn’t get anything going with their offense.

Due to penalties and tackles in the backfield, Wesson lost decent field position and punted deep.
Turner struck yet again though, and took the punt 95 yards for a touchdown. Both teams continued to battle and held each other for the rest of the quarter that ended with a score of 26-18.

In the fourth quarter the battle continued, but both teams had trouble getting their offense going due to penalties, bad snaps and fumbles.

With 2:53 left on the clock, the Cobras punted on first down, but a bad snap recovered by the Rangers put them deep in Cobra territory.
Raymond’s Turner ran the ball for three carries and eventually got the score. He also made the two point conversion to tie the game at 26- 26.

Tension was high and the Cobras tried to rally, but turned the ball over on downs. Raymond tried to throw a pass deep and Wesson’s Brian Thomas intercepted the pass to put  Wesson back on offense with 34 seconds left on the clock.

The Cobras attempted the field goal and  fell short to end regulation  tied at 26-26.
Raymond took first possession on the 10 yard line and Derrick Turner made his  fifth touchdown of the night. The extra point attempt was unsuccessful and the Cobras took over.

James rushed into the endzone on second down to tie the game at 32. The pressure was on for the Cobras to end the game, so kicker Matthew Craft was sent in for the extra point attempt. The try was successful, and the Cobras took the win in overtime.

The Wesson Cobras will host the Mount Olive Pirates Friday at 7 p.m.